In October 2014, we managed to squeeze in an overnight trip with Bjorn this weekend. We started by leaving the car at the top of the Mineral Bottom switchbacks and pedaling down to the White Rim. After a while we stashed the bikes and paddled our packrafts down to Millard Bottom. This took most of the morning, as it’s a good 16 river miles to cover that stretch. The current is slow at this time of the year so we saw it necessary to paddle strongly to maintain a 4 knot average.

After lunch we hiked up the big dry wash of Millard Canyon, an impressively vast drainage that covers a lot of ground clear up to near Hans Flat. All over the territory featured on this trip there were evidence of recent huge flash floods scouring clean the canyons, and even forming big deltas in flatter areas not normally affected. Washes as wide as 100′ or more had signs of 4′ of flood water.
Anyhow, our goal in Millard was to find the side canyon containing the old Devil’s Slide trail. Using Kelsey’s customarily excellent info we easily navigated from the river to the base of this elusive feature in 2 hours time. The big climb itself is on a very old and barely existing cattle route up a formidable Wingate wall. It took a fair bit of attention to stay at or near the actual path, and various sections were quite eroded and therefore exposed to significant drops. The top out is marked by an old well drill fitting sitting on the edge of the rim, but have otherwise no trail or cairns leading to it. It would be tough to locate the trail from this angle.
After hiking across the mostly featureless expanse of the Lower Spur for some miles we found an appealing canyon rim to camp on. Having not seen any water since the river we were glad to have the couple of gallons we had lugged up here. By the time a moonless night took over the mid was up and a dinner of bagged salmon and cous-cous brewing.
Next morning’s first stage was to find the head of Horsethief Canyon and the cattle trail leading down. Not exceedingly difficult, but we did wander the rim a bit longer than needed because it was exhilarating as always to play around the sudden shift from horizontal to vertical. Once down in bottom via the faint old trail we came across the first water since the river in the form of a very generous spring source filling and over flowing sandy pools in a flood ravaged canyon.
This Wingate defile is a long one. From the narrow, verdant and shady upper reaches to the open sun baked slog of the endless lower canyon it seems like most of the day was spent on this portion our adventure. Again we marveled at the violence of the September floods, cutting ten foot banks out of sand deposits and uprooting mature cottonwoods. Around mid afternoon the appearing mudflats of a receding river prompted us to inflate our packrafts and drag them behind us the last stretch. A firm substrate a foot down below the clay slip allowed us to do this.
Crossing the Green was simple, but gaining a landfall on the opposite side was near epic. Negotiating the collapsing steep bank from sitting in a squirrelly packraft in swift current, to hacking our way into impenetrable tamarisk thickets provided some of most fun we had that day, seeing us moving the very short distance from river to White Rim road in maybe 45 minutes.
All that was left then was to locate our bikes and ride up the Mineral switchbacks to the car. 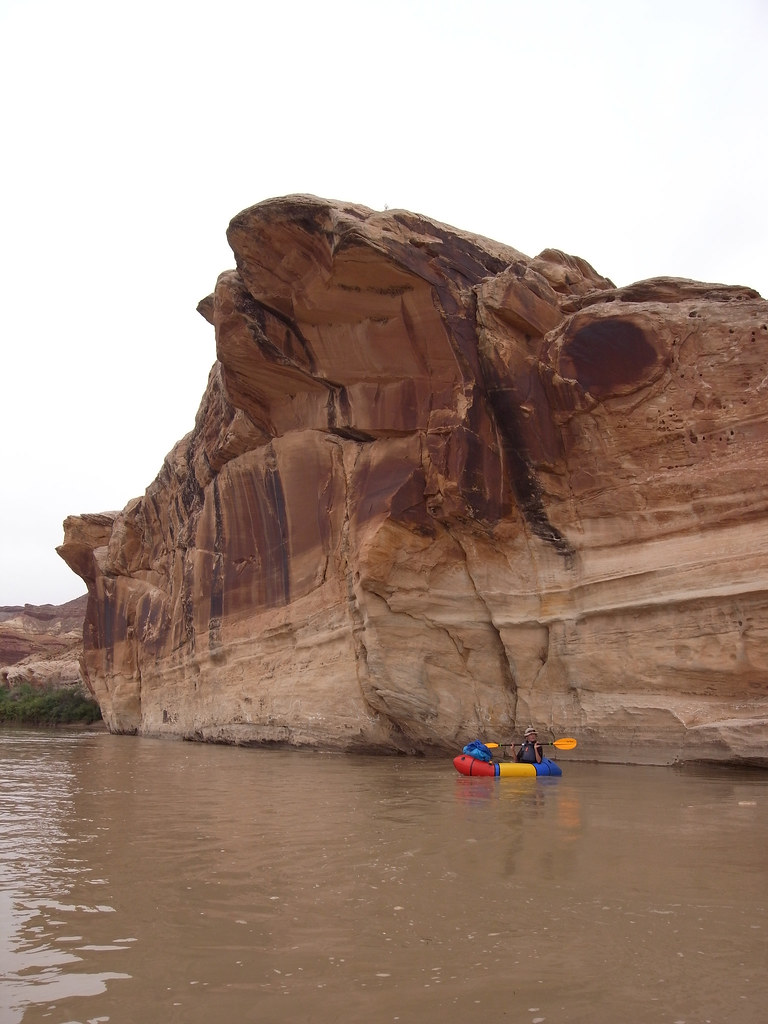 Paddling the Green on the way to Millard Bottom 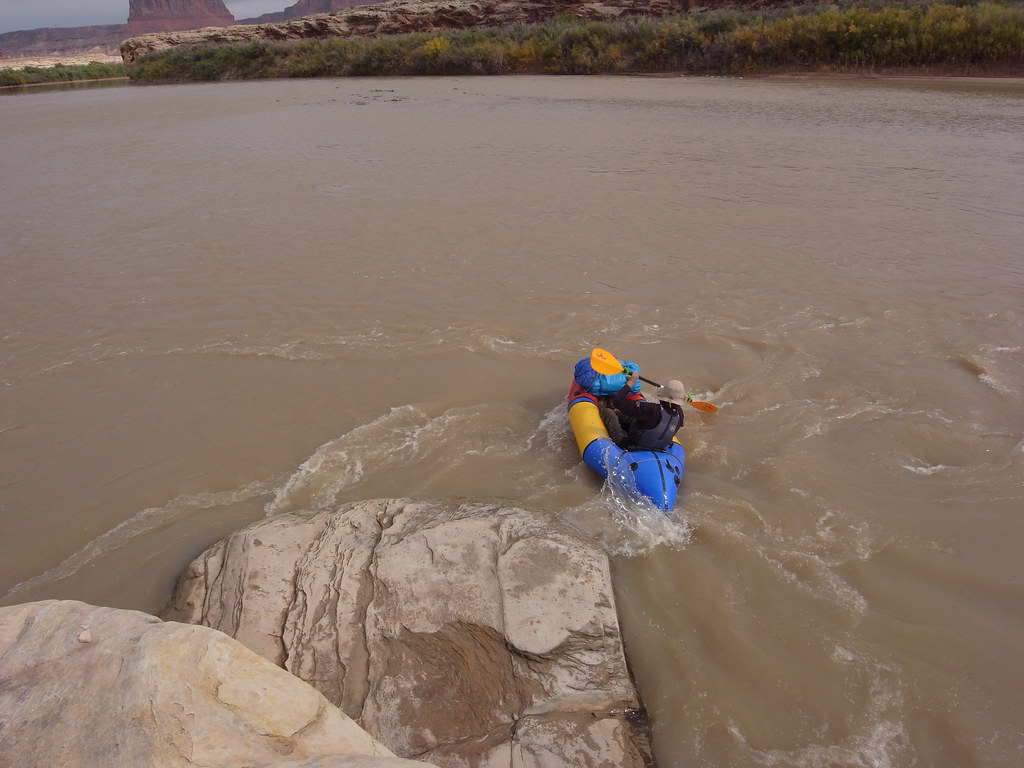 Bjorn playing in an eddy before packing up and starting the backpacking portion of our trip. 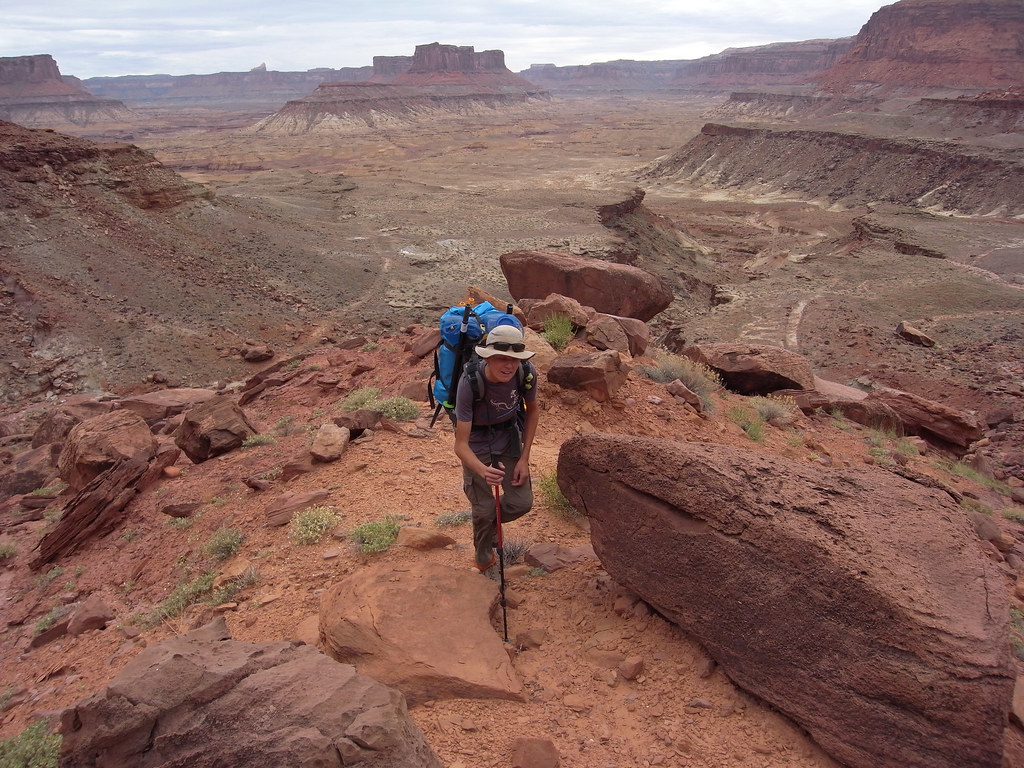 The expansive drainage of Millard Canyon stretching out behind Bjorn. Cleopatre’s Chair in the distance. 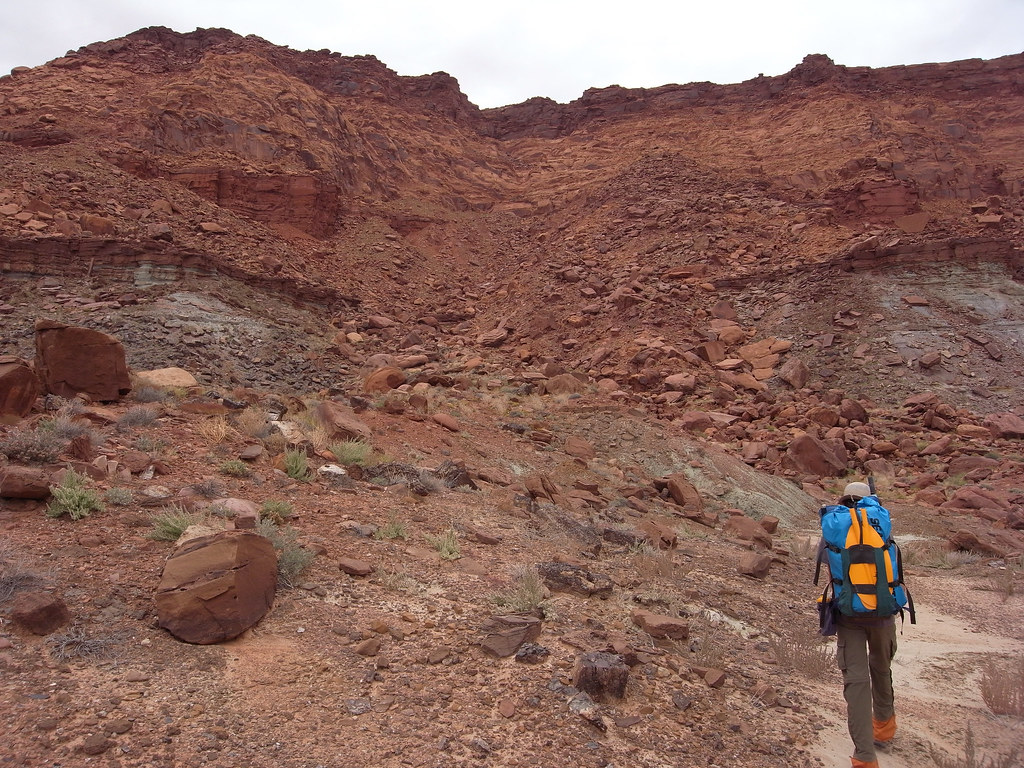 Approaching the wall containing the Devil’s Slide trail. At this point we had no idea where it ran. 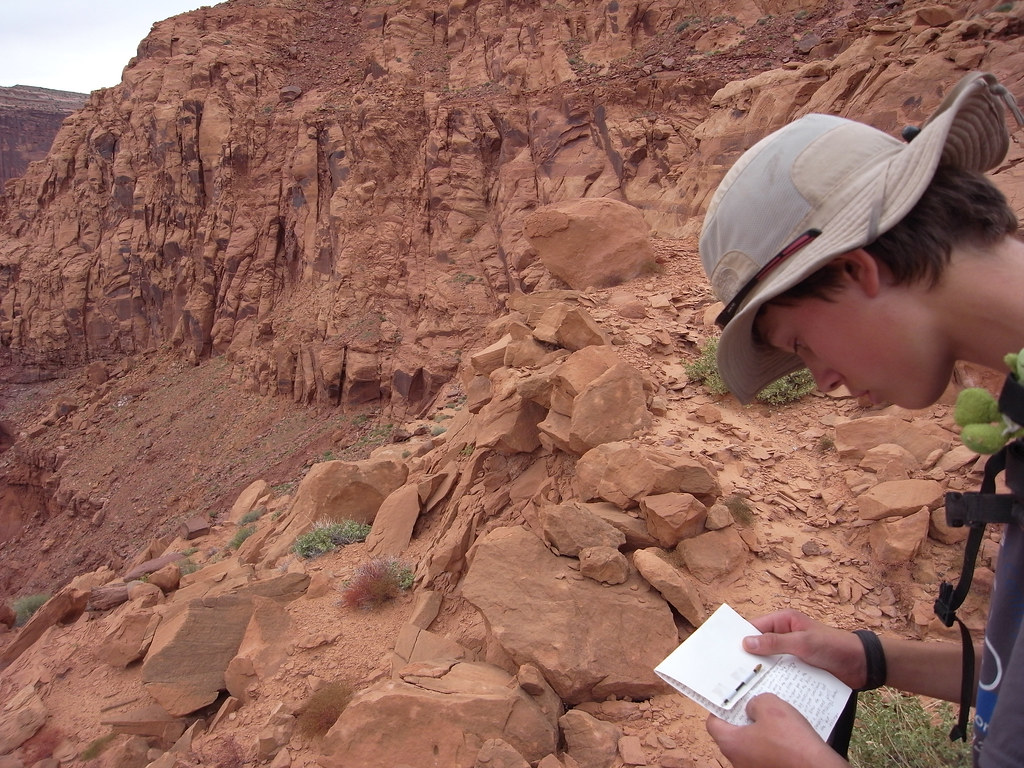 Checking the copy we did from Kelsey’s book midway up the trail. 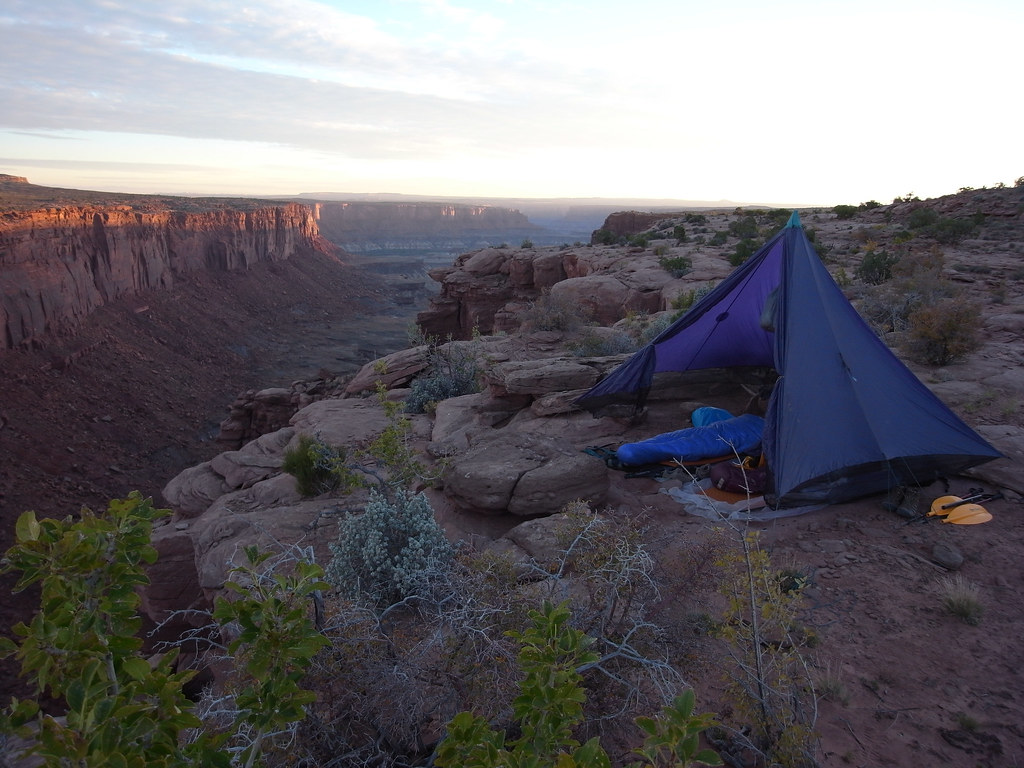 Camp on the edge of unnamed side canyon to the Green. 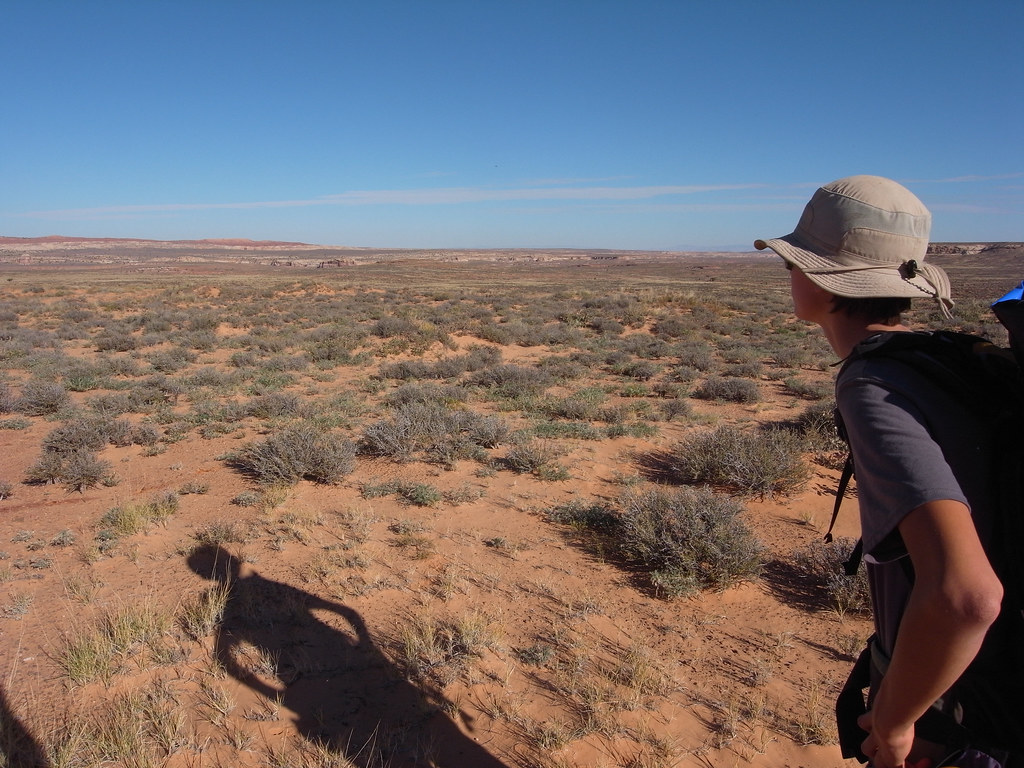 Surveying the monotone expanse of the Spur before heading out to find the head of Horsethief Canyon. 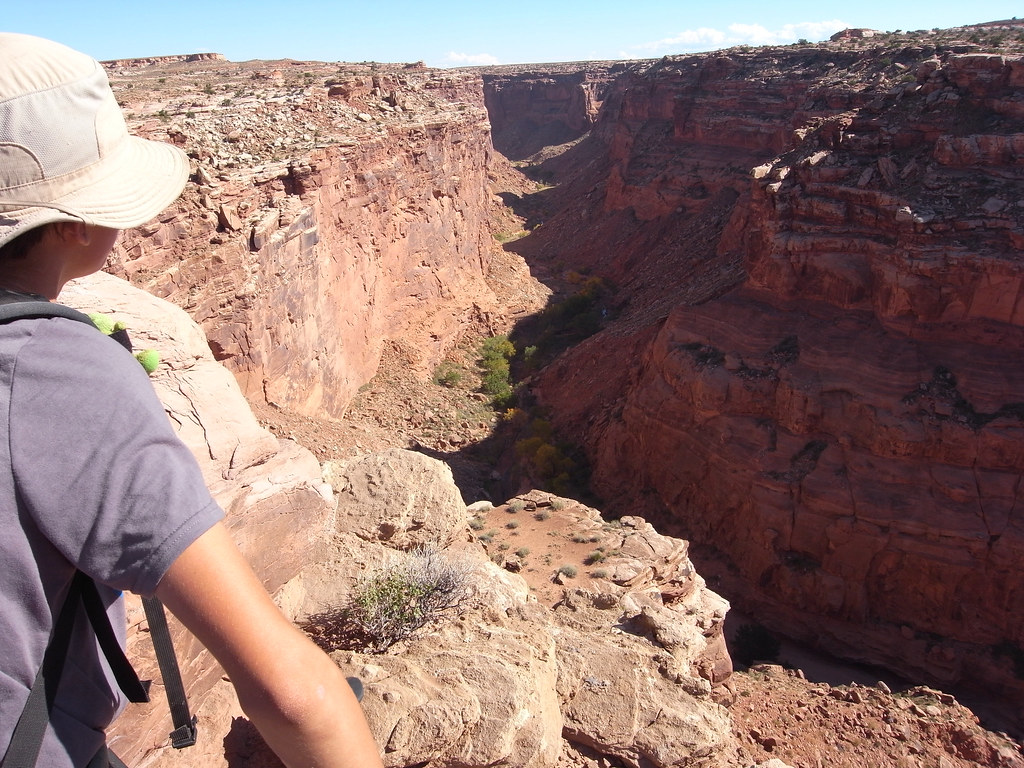 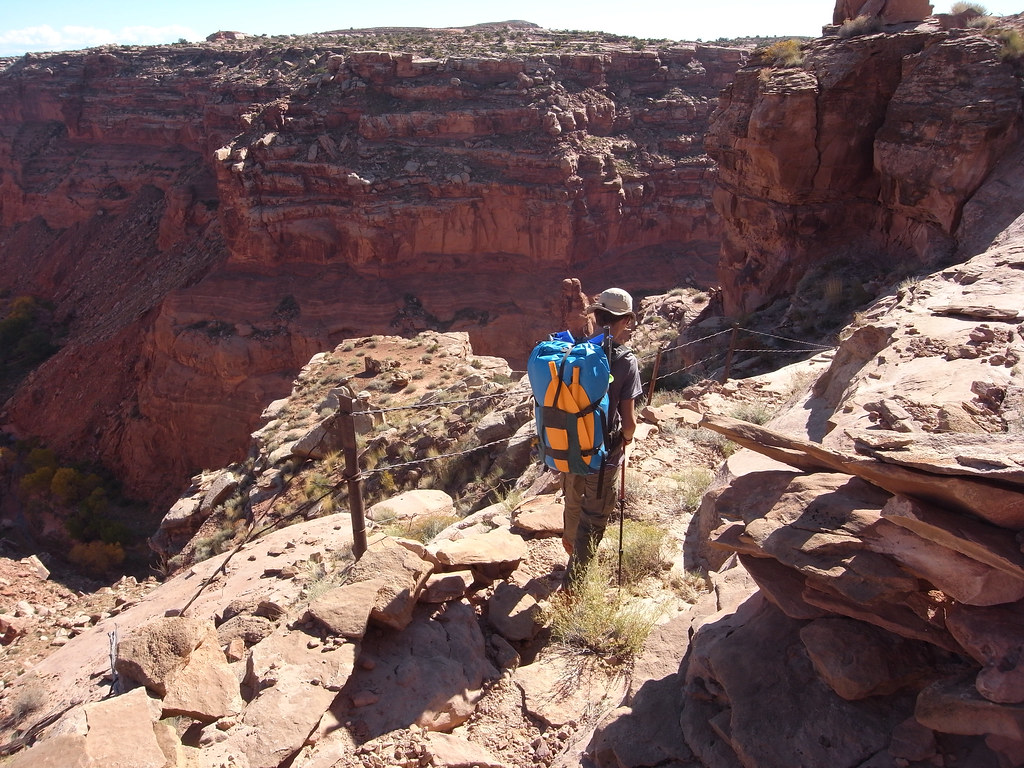 The well defined upper beginning of the trail into Horsethief. Soon hereafter it deteriorated into loose rubble and erosion. 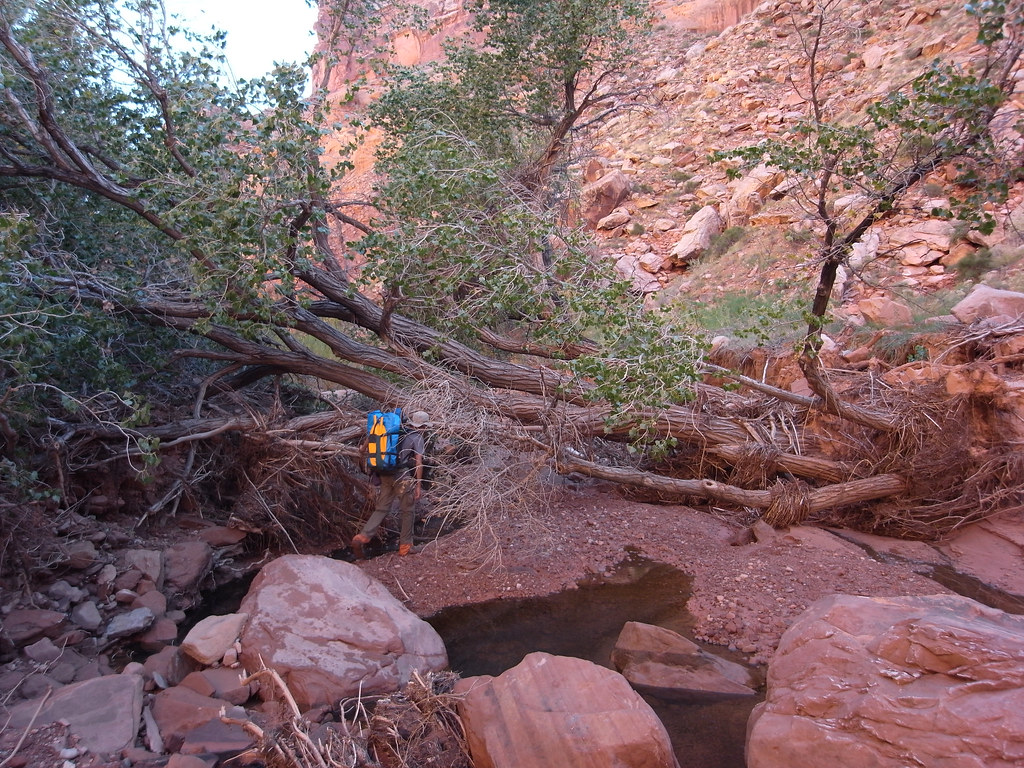 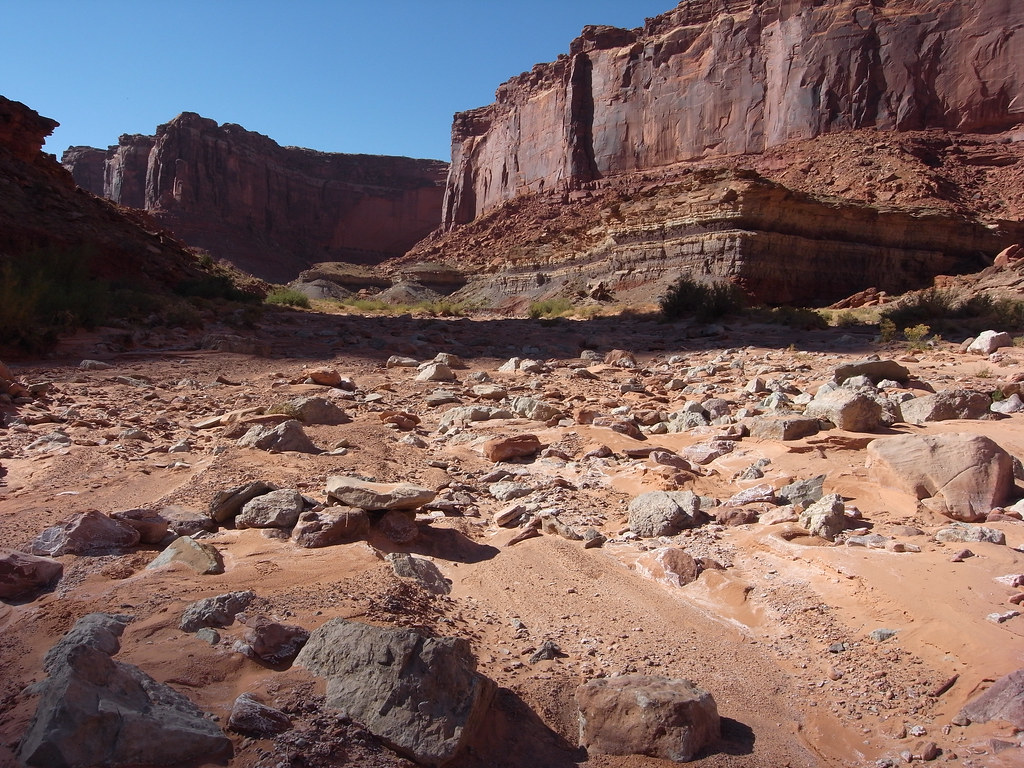 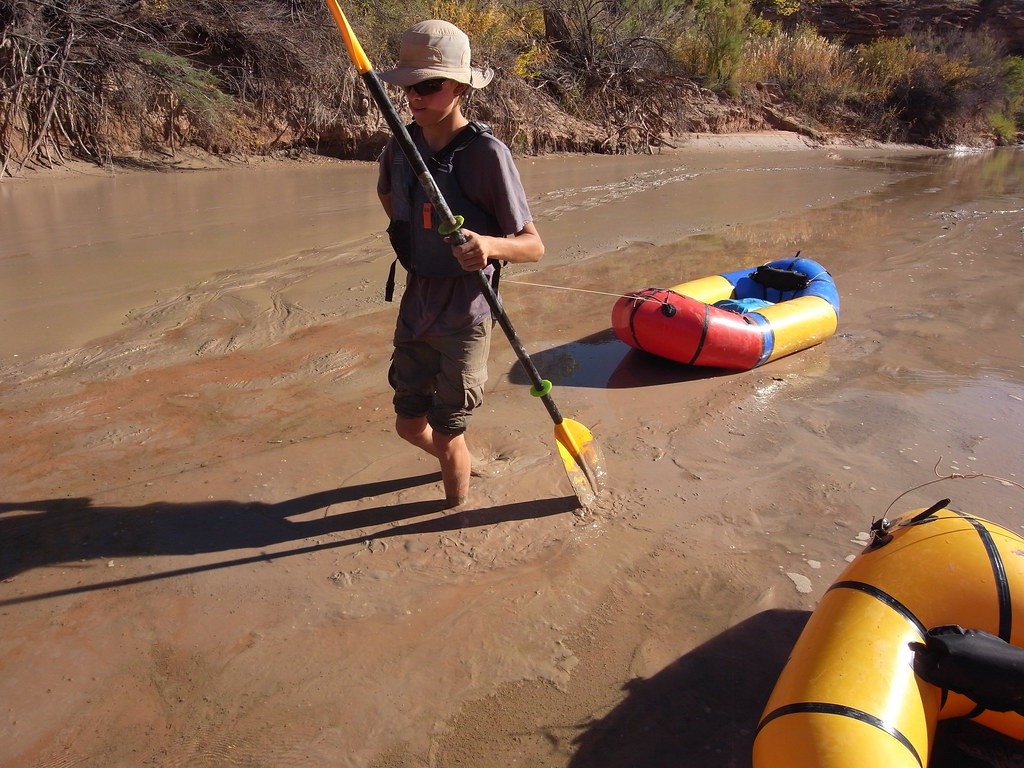 Getting real close to the Green. 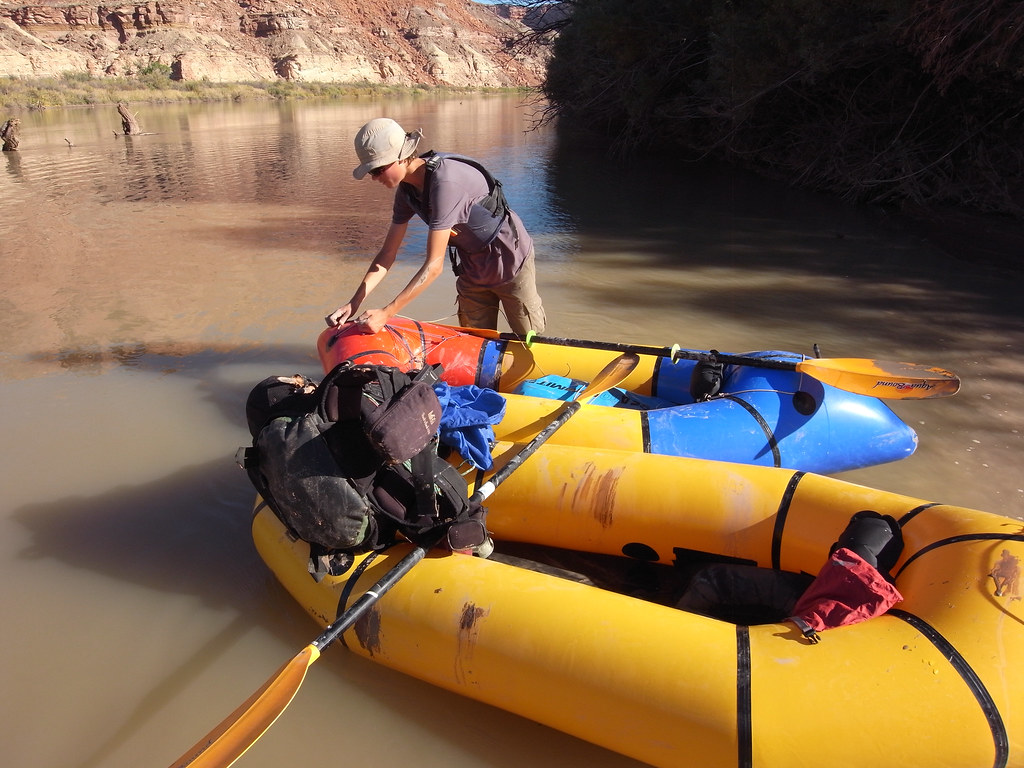 Readying for the 2 minute paddle across the river. 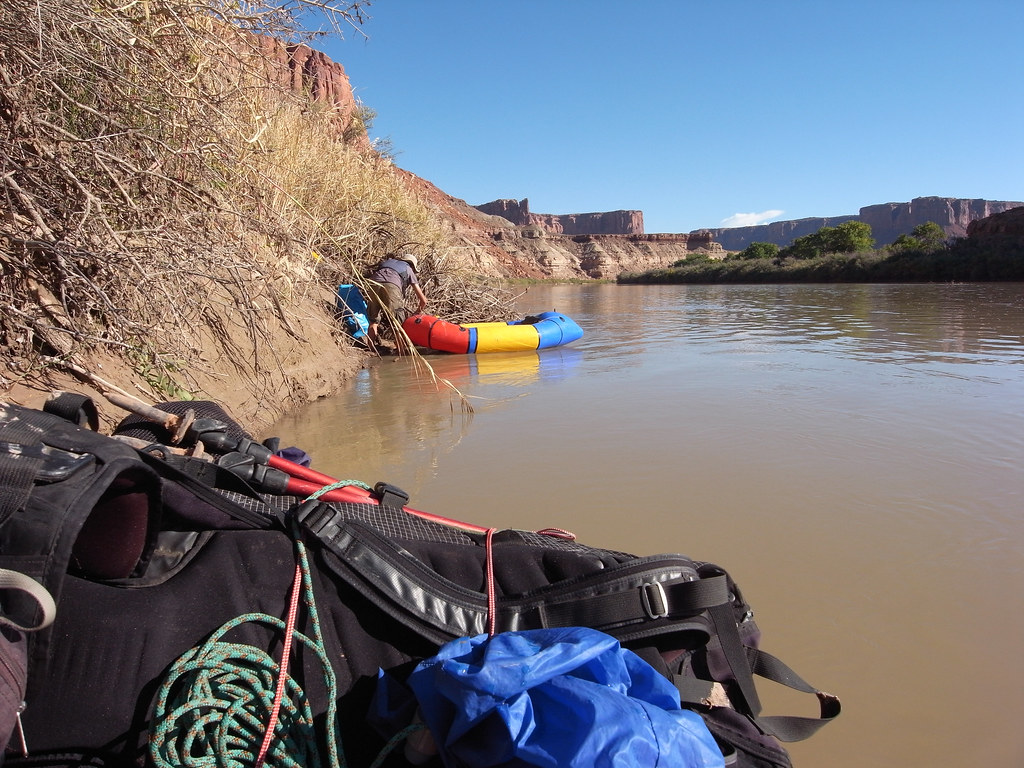 Trying to gain a hold on the White Rim side of the river, so we could fetch our bikes and ride back to the car. 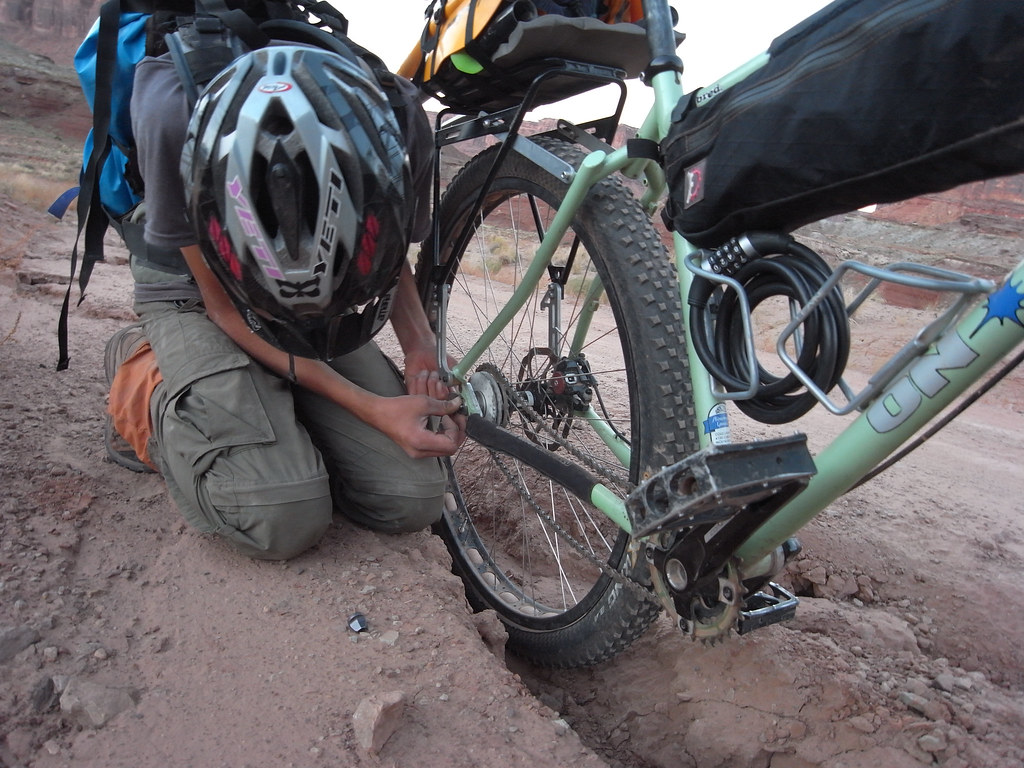 Bjorn changing into the climbing gear on his dingle speed, before attempting the Mineral climb.