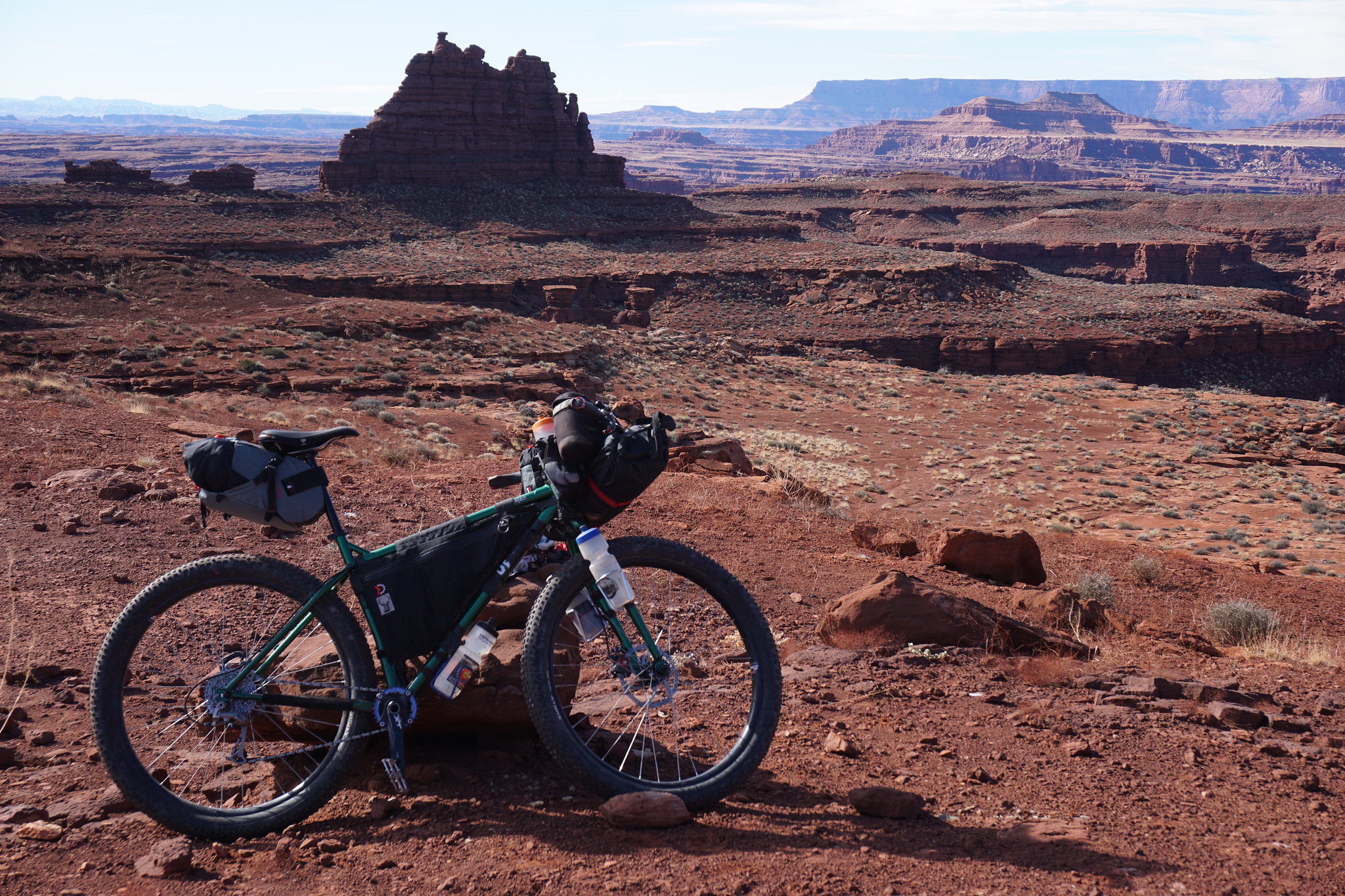 The bike, fully loaded for 2 nights. Somewhere around here the descent to the Hermit area starts.
In late January 2015 I had a few days off and a recent big rain promised full potholes and trickles in canyons where otherwise water is scarce. There was a a full moon, too. Time to go to the desert!
Kelsey’s books have a few spots I wanted to further research along the 55 mile Lockhart Basin jeep route.  From Moab one gets to it over Hurrah Pass, with the far end terminating near the Needles. The middle section is pretty rough compared to the White Rim road right across the river. One part especially is said to be very difficult for stock vehicles.
My choice of transportation is a mountain bike, which poses the challenges I need to make a trip like this interesting. On this occasion I did an out and back from Moab going as far as Indian Creek, or about 110 miles on the bike. The two areas I explored on foot were Hermit Canyon with the bench hike to Tangren’s camp, and, much further south, Kelsey’s route to lower Indian Creek via Rustler.
To make all this happen in 2 days, plus one evening in the beginning, I had to do a fair bit of night riding. This was okay as I have been on the Lockhart road at least half a dozen times, and nights are too long this time of the year anyway to just sit around camp.
Near Tangren’s camp on the Hermit trail is a spring. One of my goals was to verify this rarity. Kelsey doesn’t mention any personal experience with the spring, but in an interview with an old-timer it is talked about. Alas, I didn’t find it.
It is about 5 miles from the remote center portion of the Lockhart road to the cowboy camp, depending of one’s success with routefinding in these complex Cutler formation canyons. The latter part of the hike is along a narrow limestone bench 50′ above the river.
In the vicinity of the camp are signs of seeps that may have provided drips in the past. However, there’s no dead water loving vegetation or other signs of dried up springs.
I wasn’t 100% relying on Tangren’s water for survival, but it would have been awfully nice to have. Instead, after the customary tamarisk battle, I filled my containers with silty river water and slogged my way back up to the bike and moved on to camp.
The next day’s objective was to see if Kelsey’s ‘little step possibly requiring a rope’ in lower Rustler really is no big deal as he says. And, more importantly, check if one can climb up this obstacle from the river without a pre-hung rope (think future packrafting trip).
The route start from a 3 mile spur off the Lockhart road about 12 miles from the southern end. Down one canyon to another to Rustler. Pretty straight forward as off trail hiking goes. After an hour and a half I got to the big pour-off in Rustler. Suddenly one’s mindset has to adjust from the comfortable horizontal aspect of hiking wide sandy washes, to edges, drops, loose rock and potential violent death.
There was only one option for the downclimb and at first it was a No Way! But after probing and studying and mentally adjusting it started looking a little better. I  reluctantly did the first step off the rim with significant exposure but relatively non technical, then traversed on a skinny ledge to the last step. Here I hung the rope from a chockstone and went down.
Below I quickly ran down to the confluence with Indian Creek to fill my jugs with water. There was no time to go all the way to the river as I needed to be back in Moab that evening. At the pour-off I managed to reverse the moves without the rope. A pile of cheater-stones greatly facilitated the first step.
This was a fun trip with some interesting things to solve, but all in all somewhat esoteric. Definitely not what a first-comer to the area would choose. After many years of exploring from my front door, these days I need to look carefully at the maps to come up with something new. Hence an outing like this. 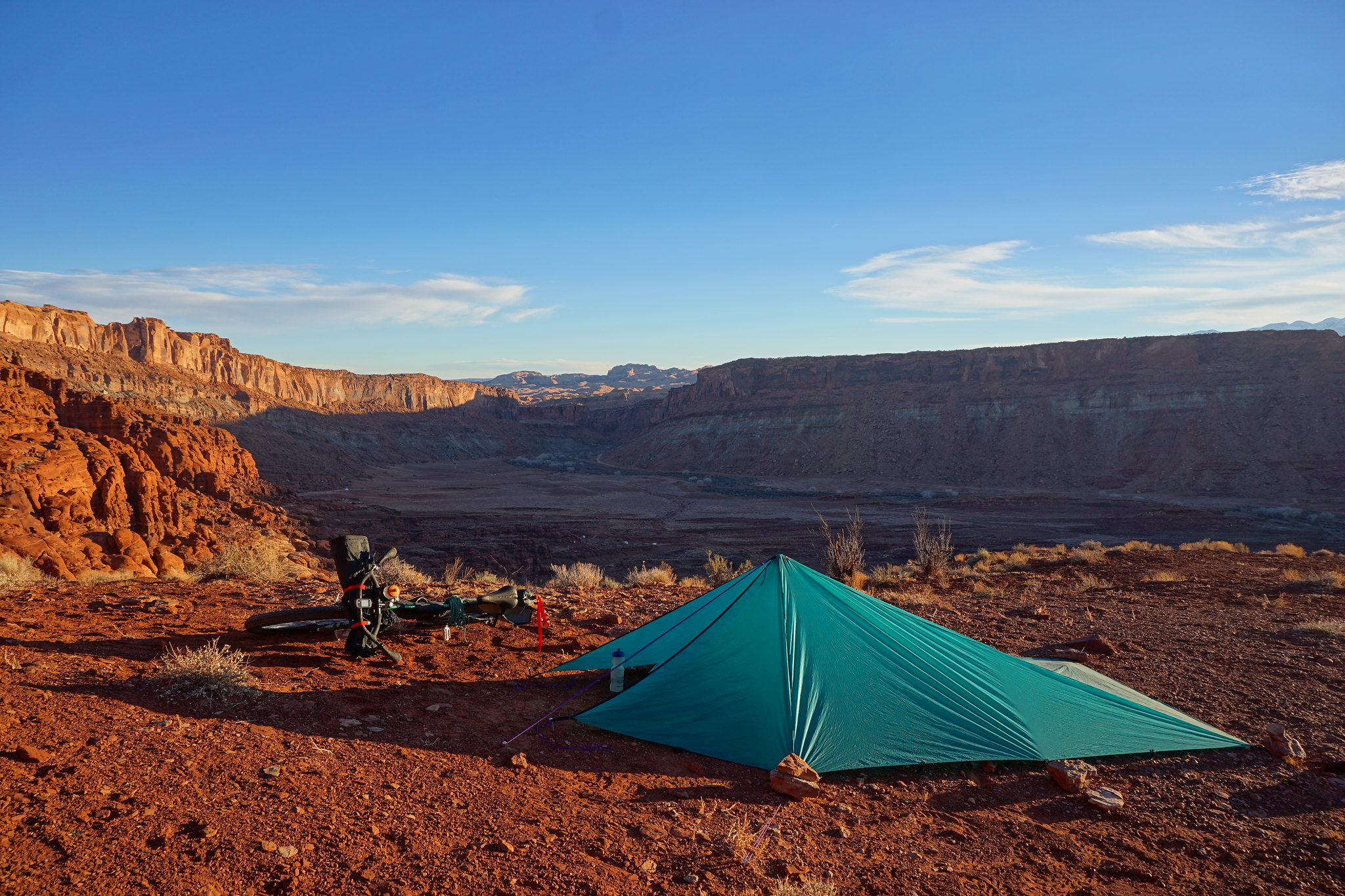 The first night I simply rode up to Hurrah Pass from home and camped to get a head start. Here the morning scenery. 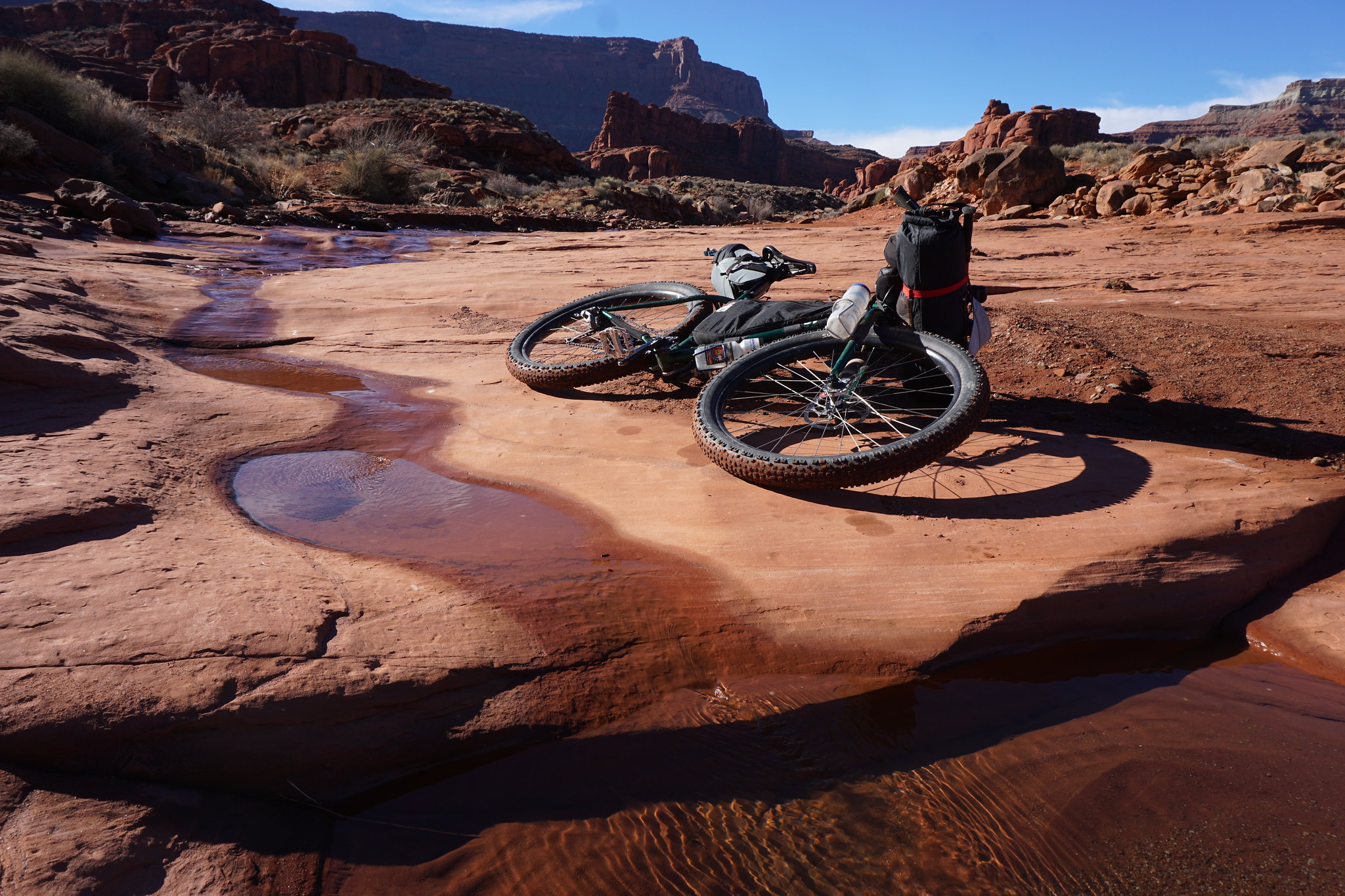 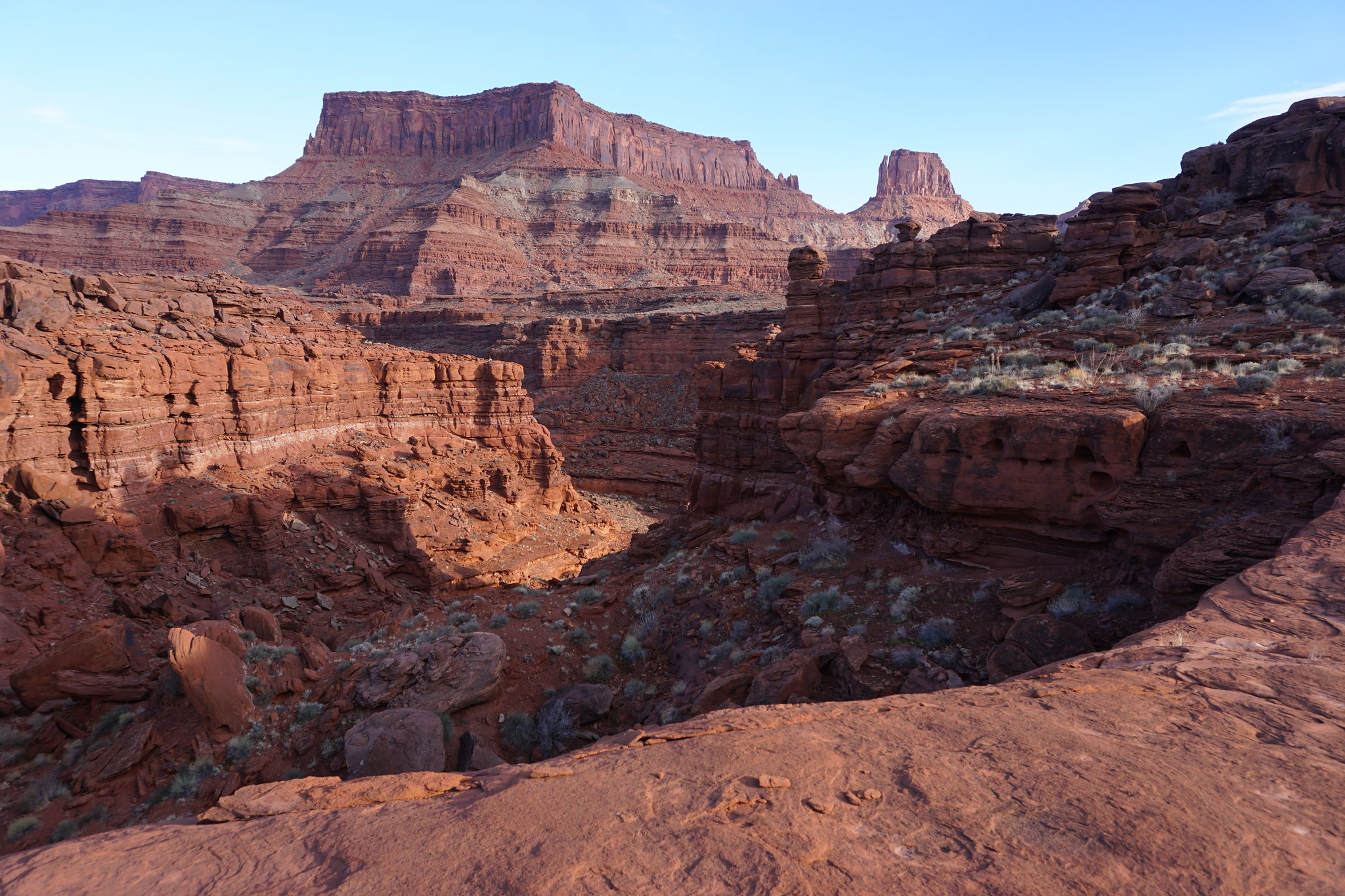 For Hermit canyon this little side drainage provided a relatively smooth entry. 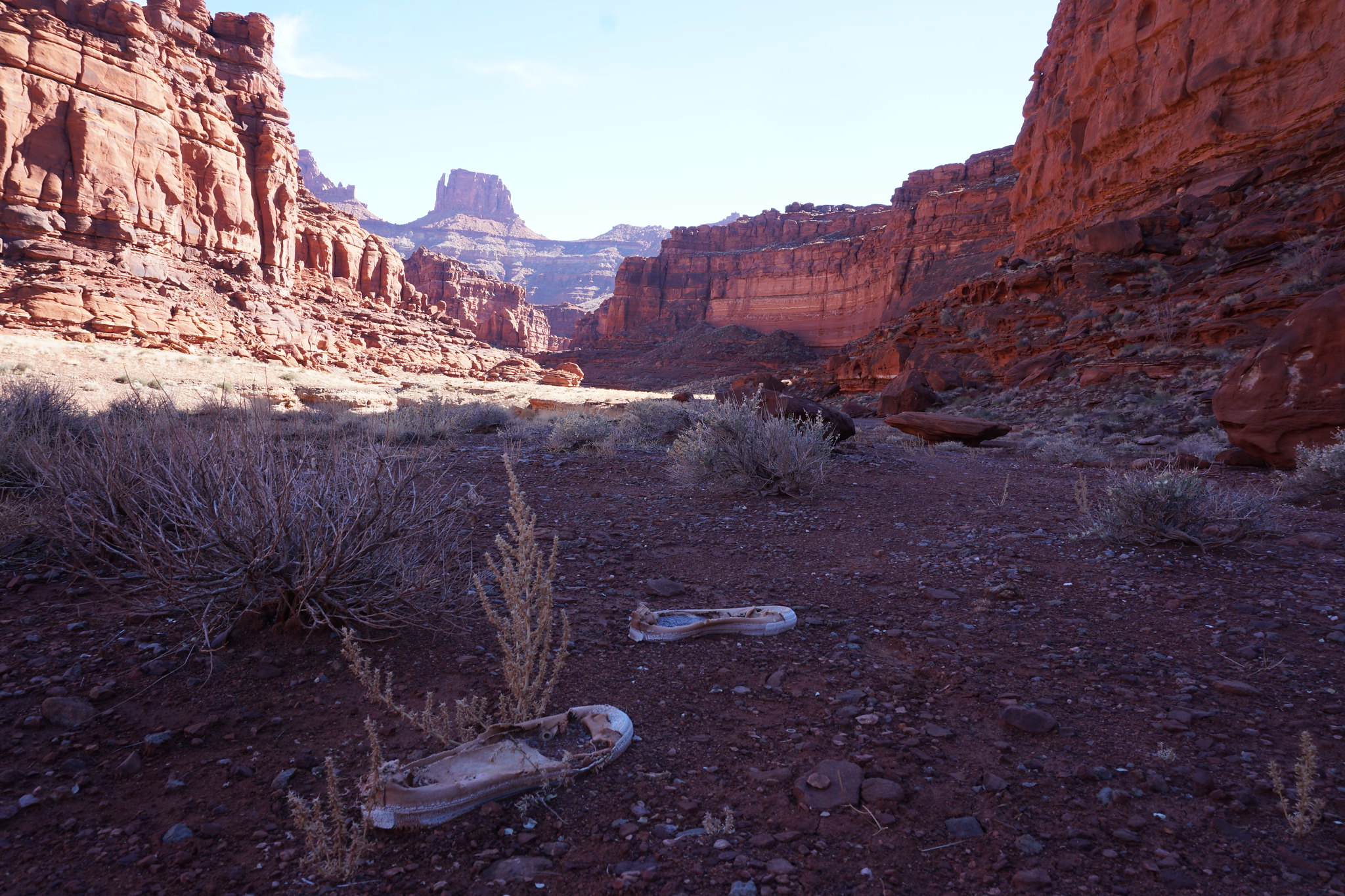 In an otherwise pristine and untracked canyon suddenly appeared the evidence of someone, POOF, blown out of their shoes. 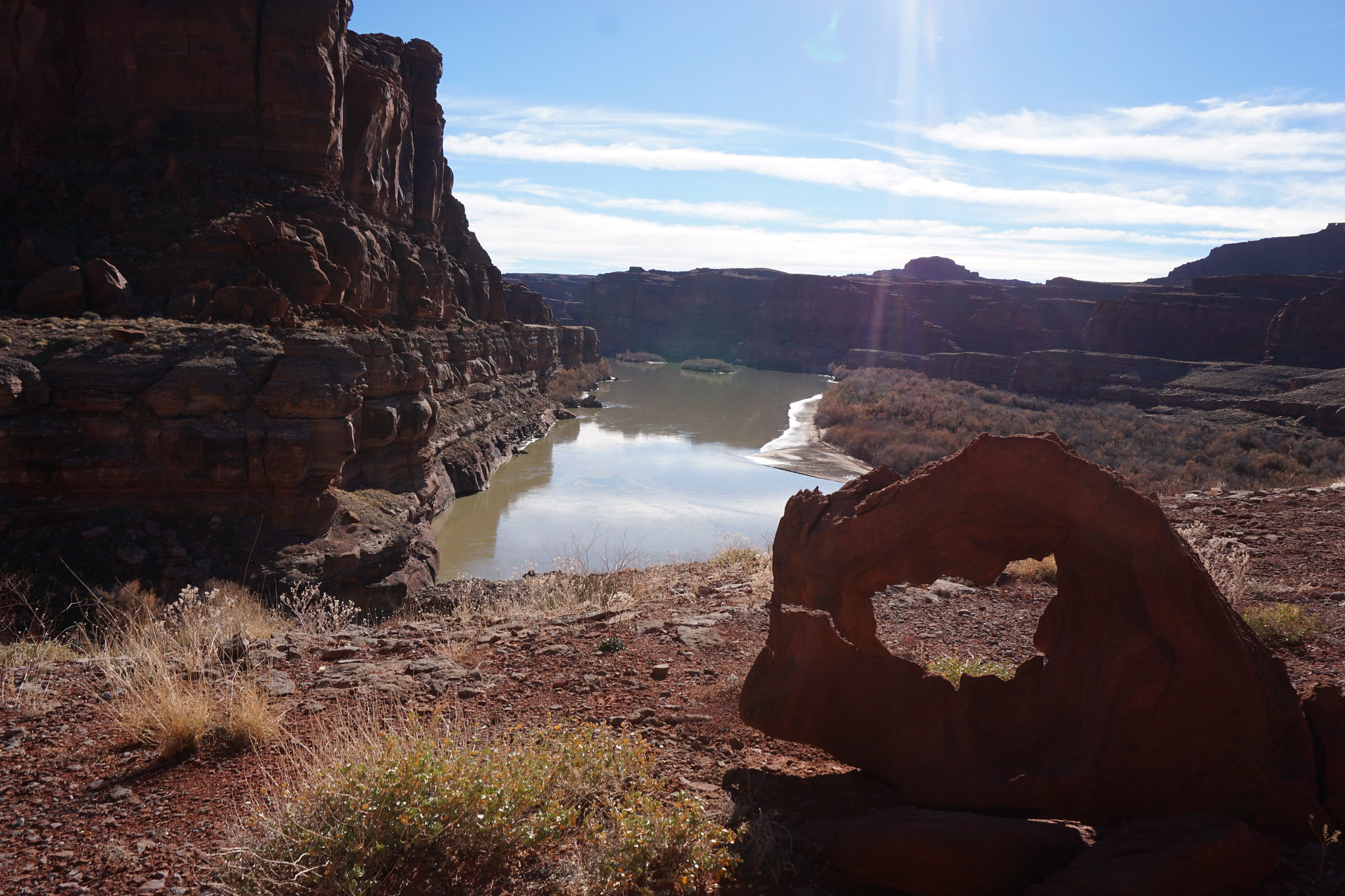 Once at the river the Hermit trail follow a limestone bench downstream. 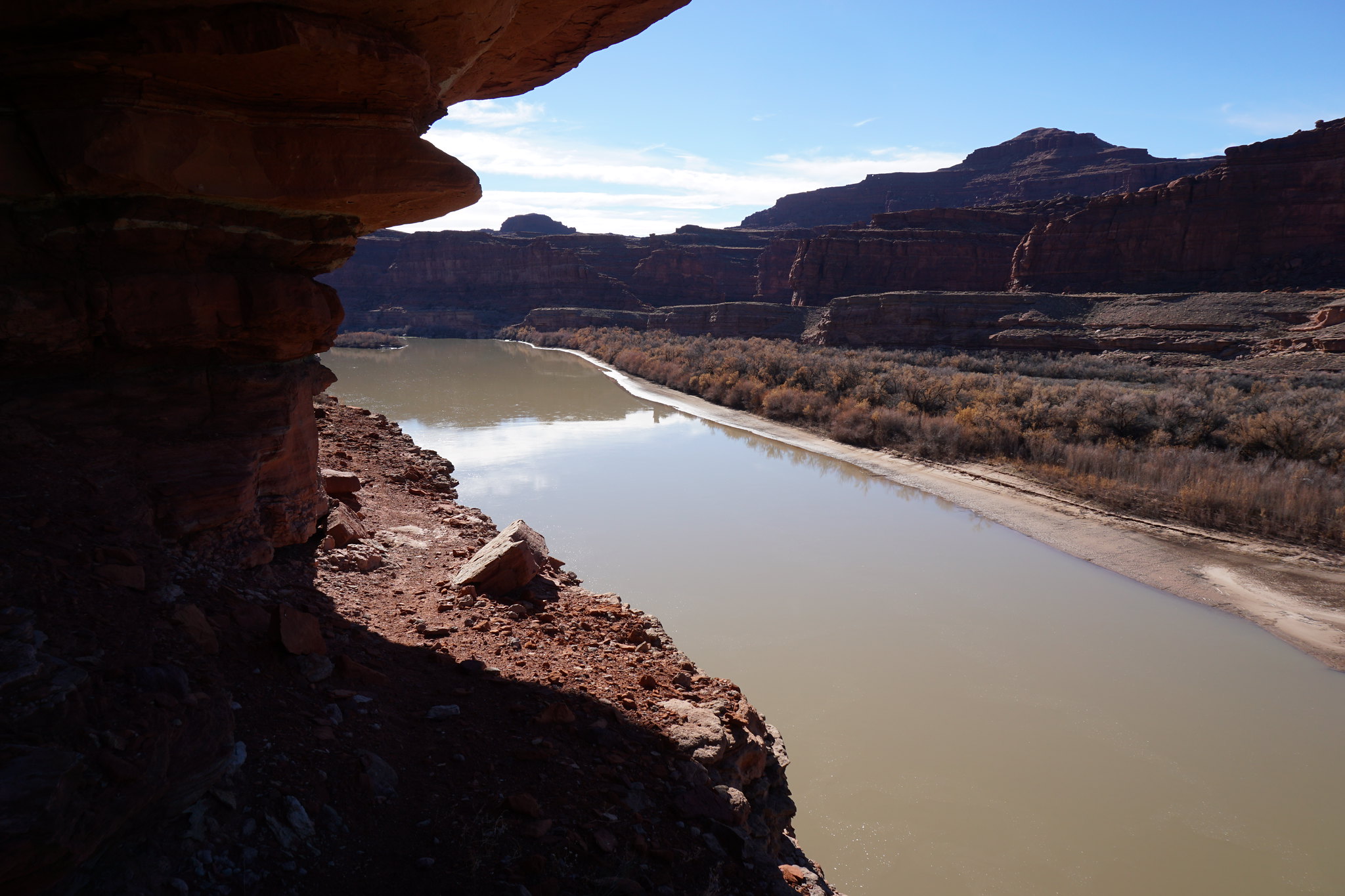 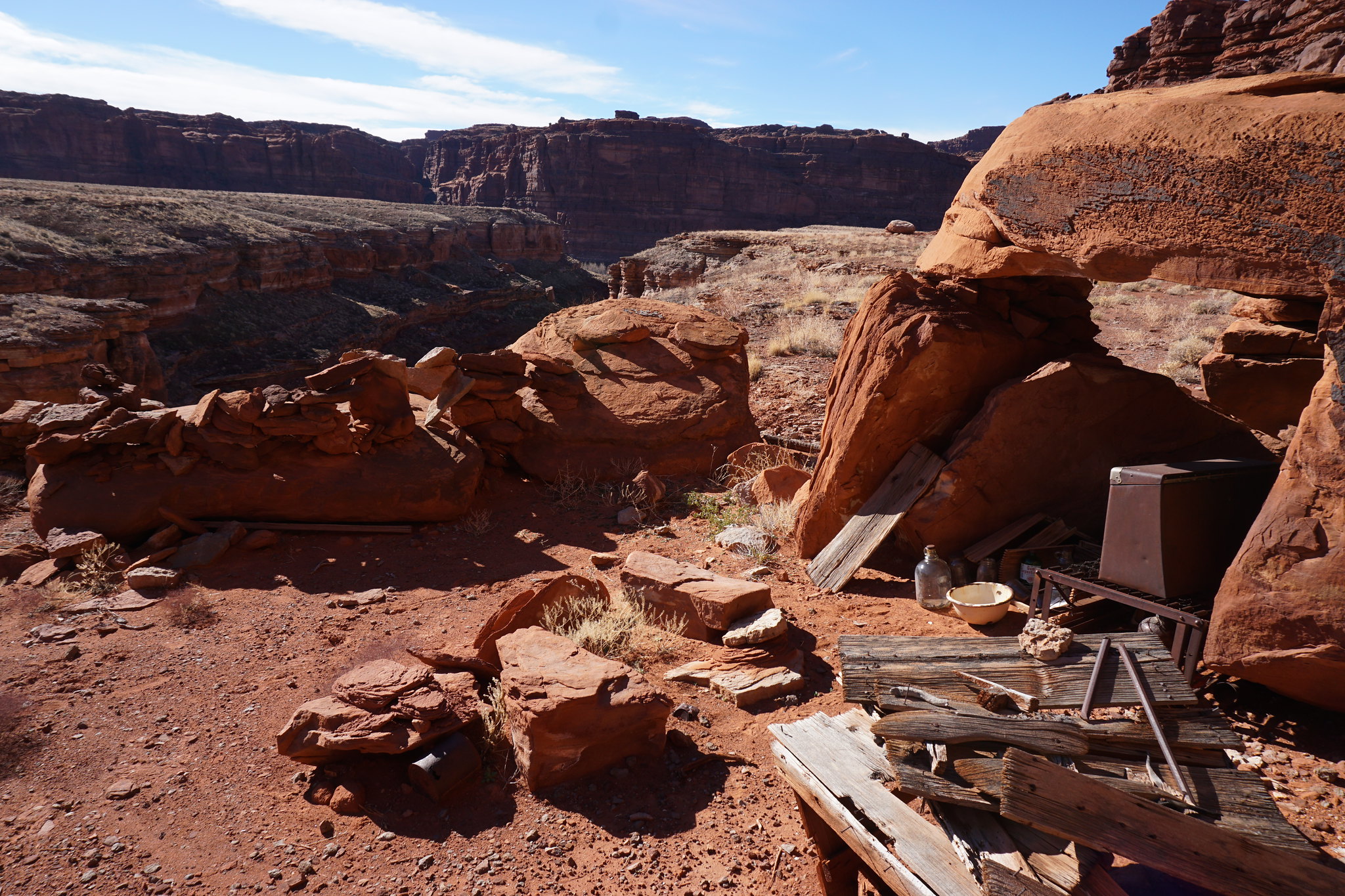 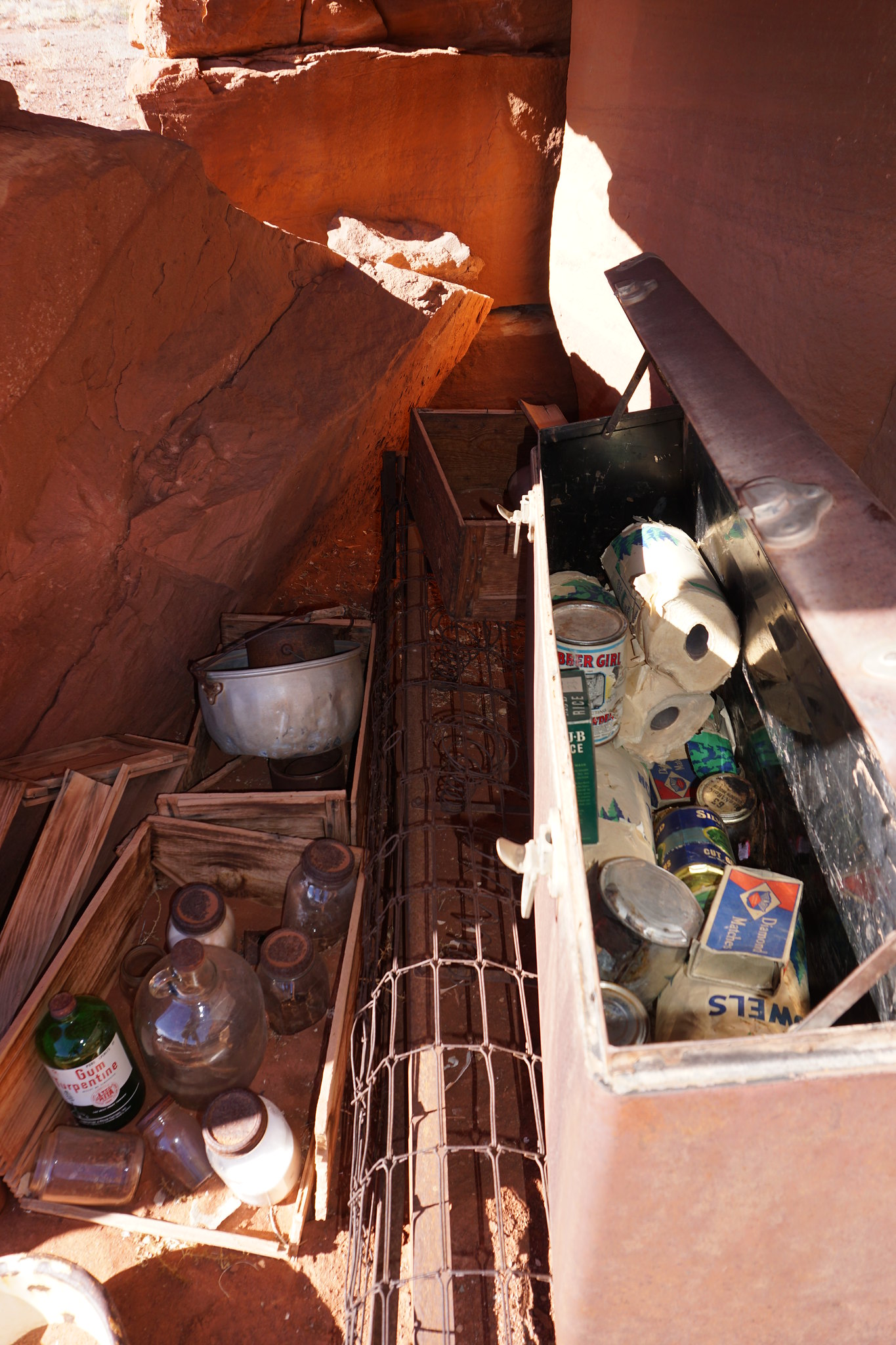 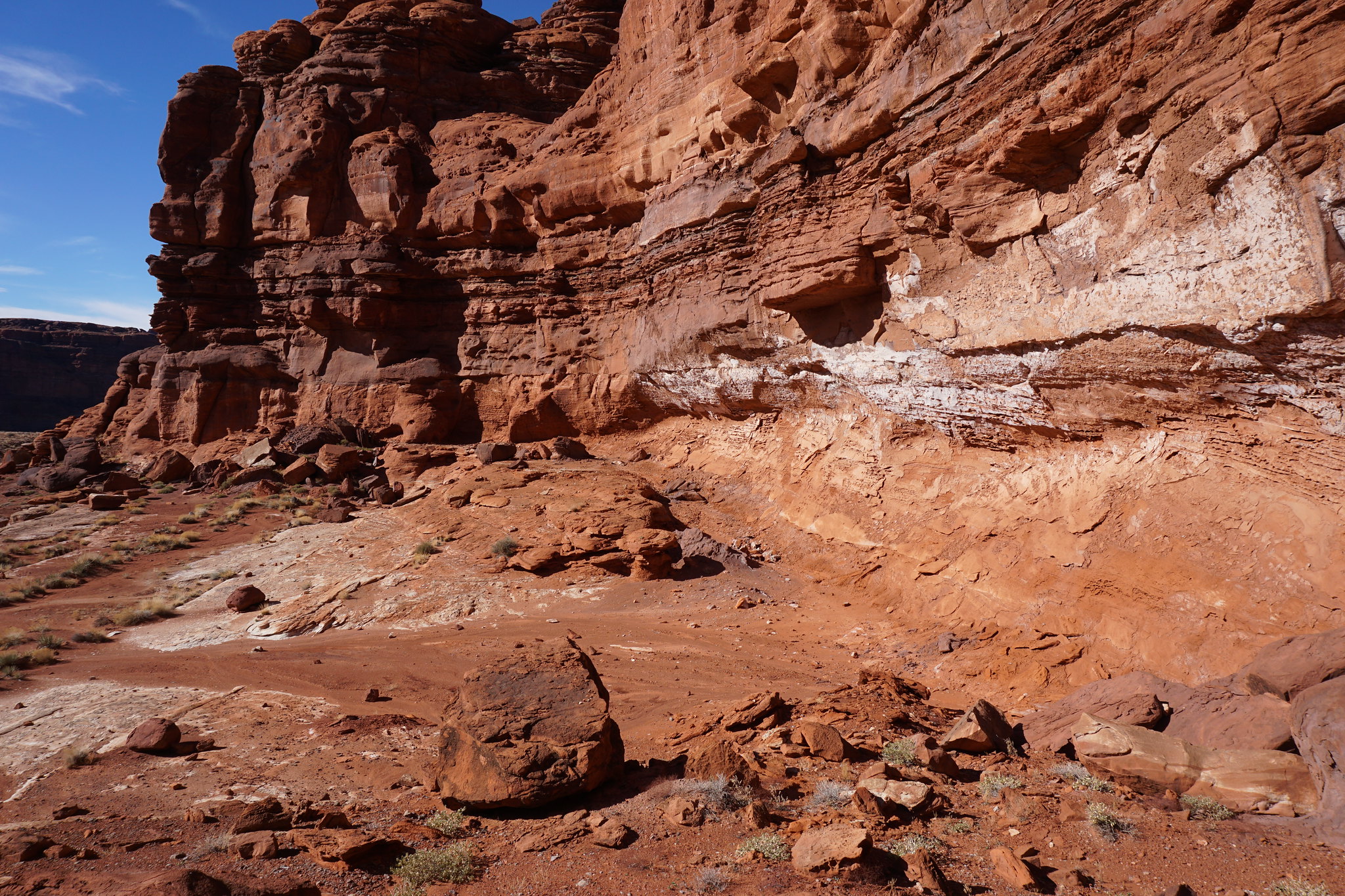 This mineral coated alcove was the only signs of past water that I found. 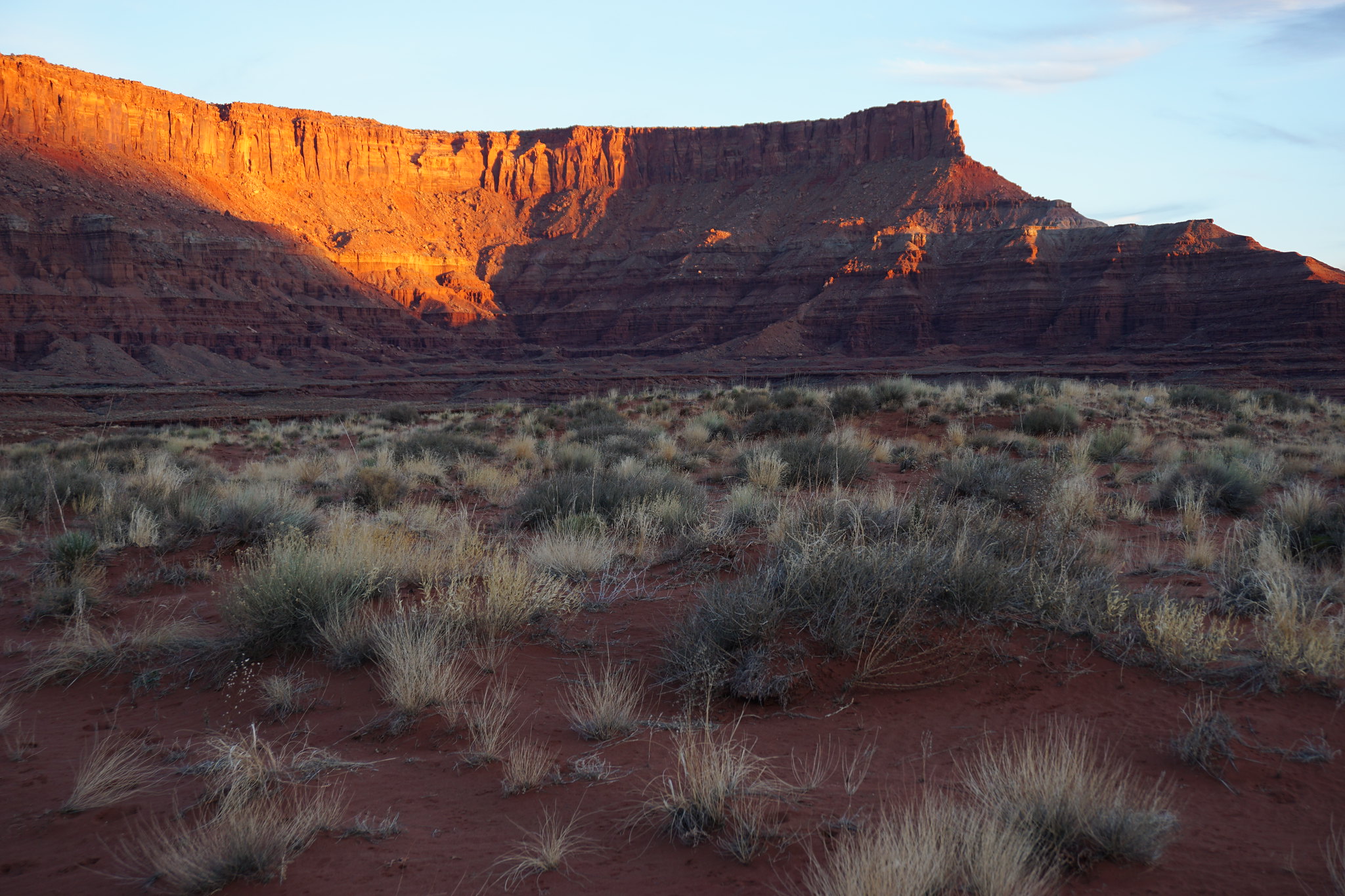 After returning to the bike from the Hermit diversion I still had 20 miles of rugged jeep trail to camp. Darkness fell quick and I finished up in the dark at 8pm. 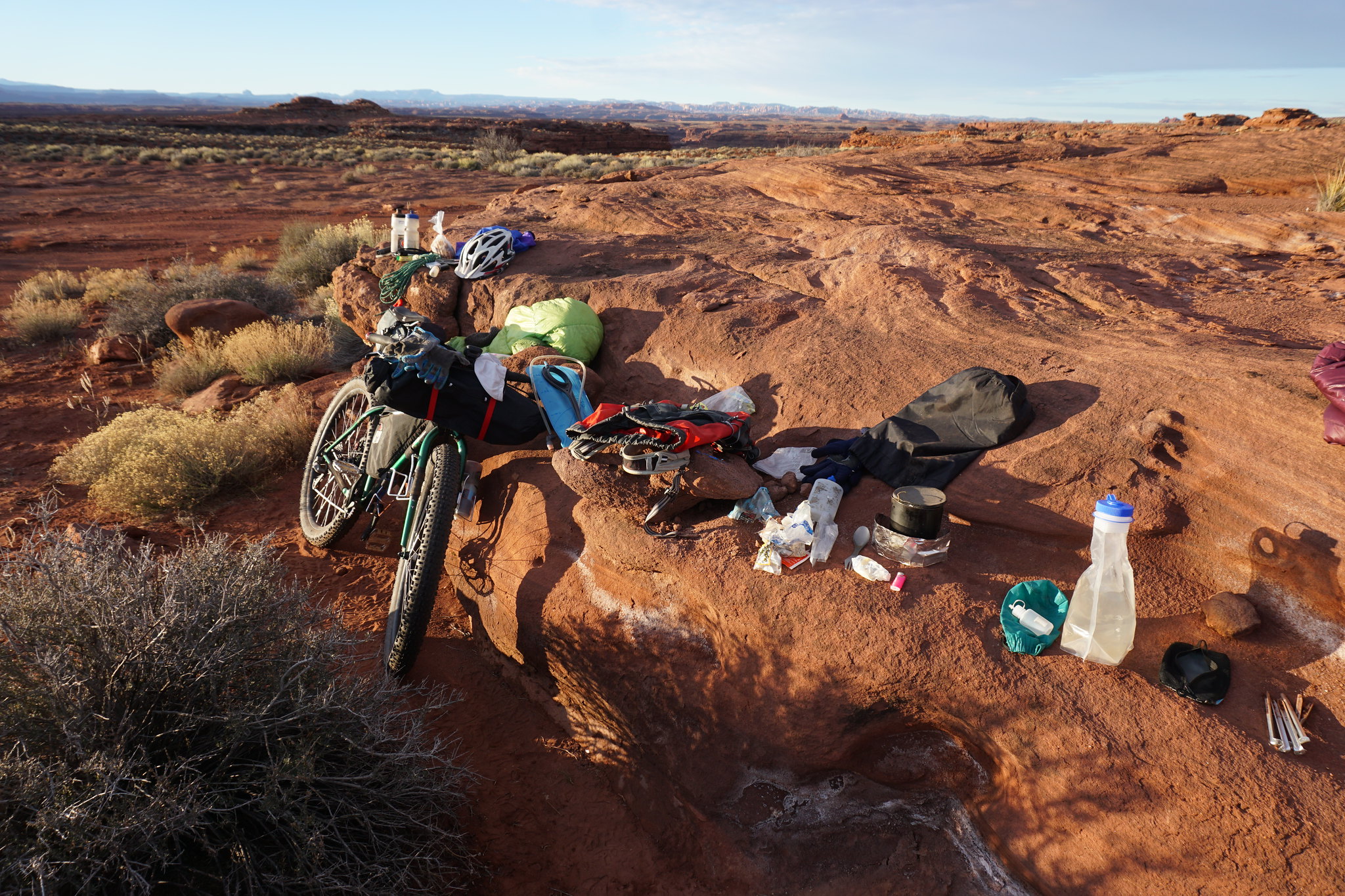 Time to pack up and find the route down Rustler on the morning of day 3. 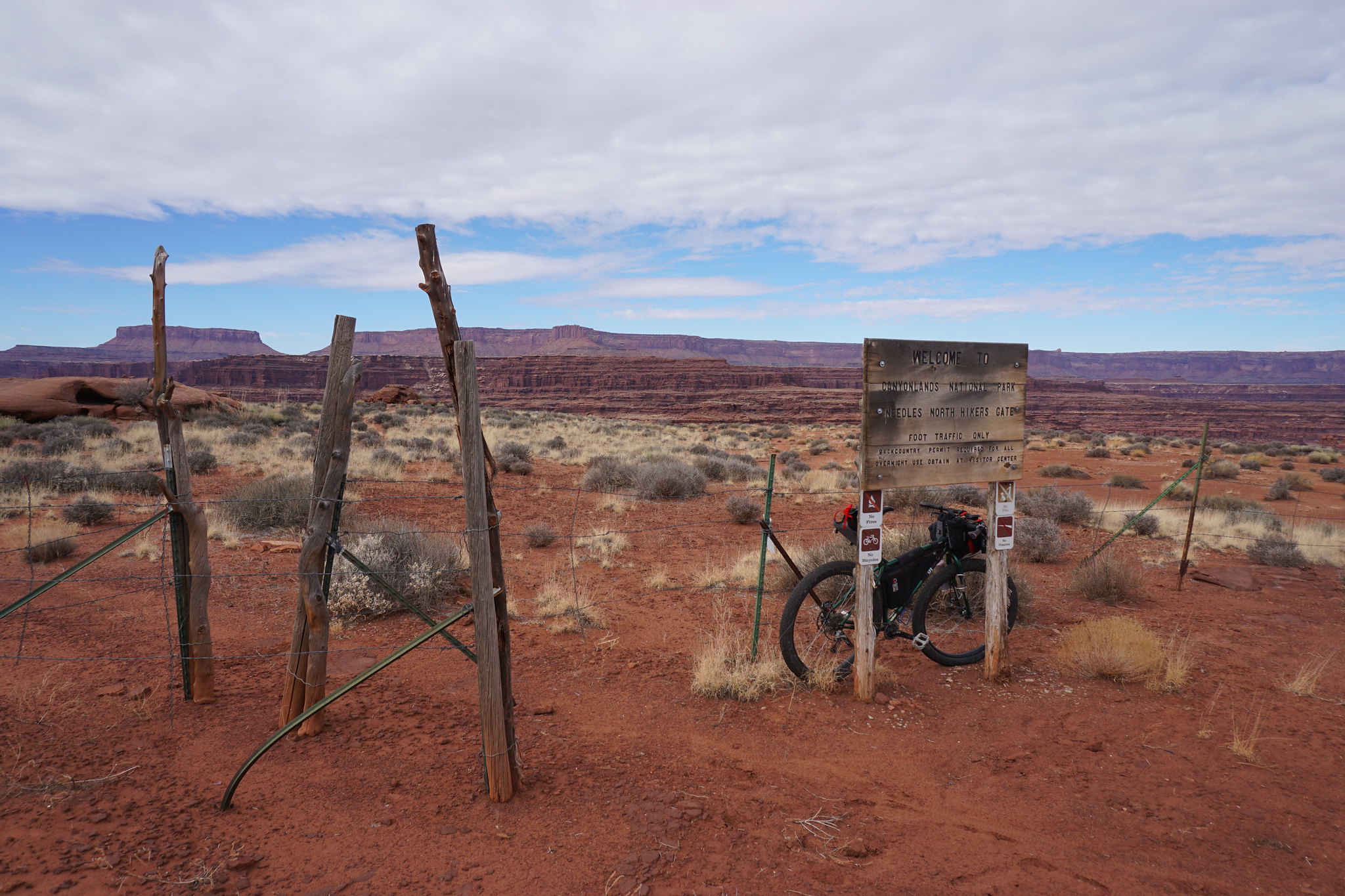 At the end of the spur off of Lockhart one gets to a NPS Needles boundary. Best to leave the wheels here! 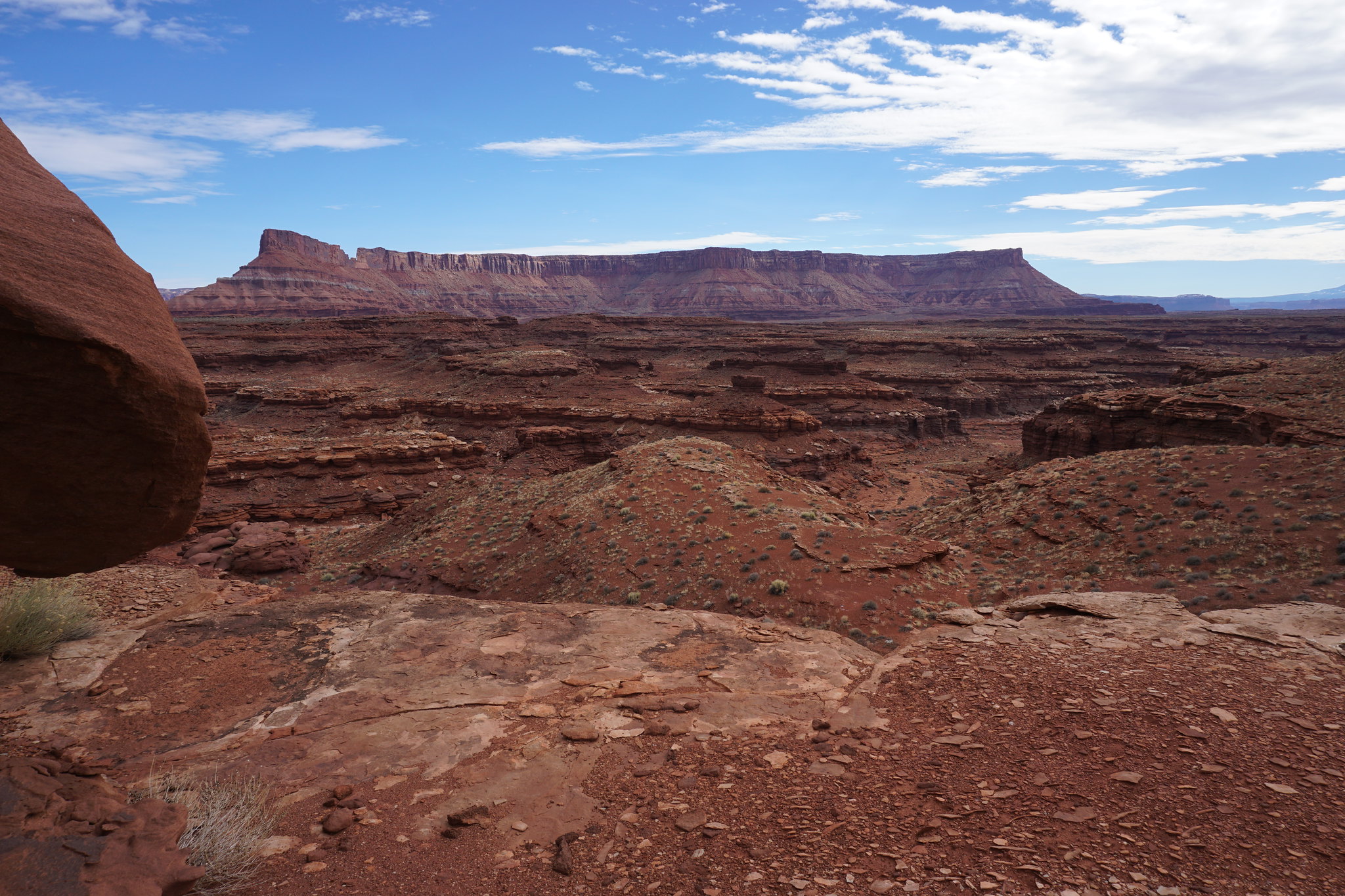 And here’s a view of another indistinct, generic defile, this time the chosen route to connect with Rustler and eventually lower Indian Creek. 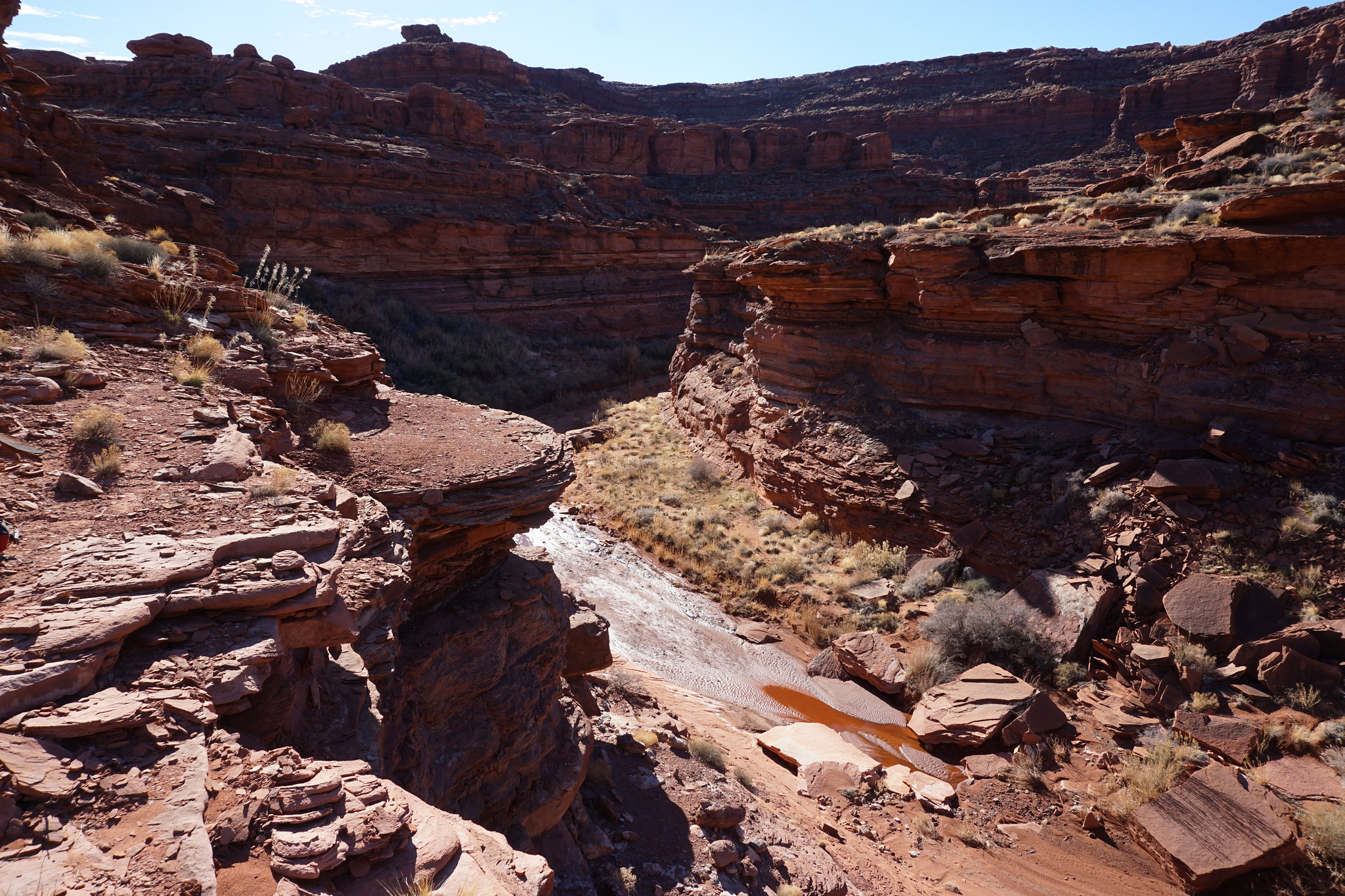 Several turns later, in Rustler, one arrives at a sizeable pour-off. The way down starts right at rim in front of me. 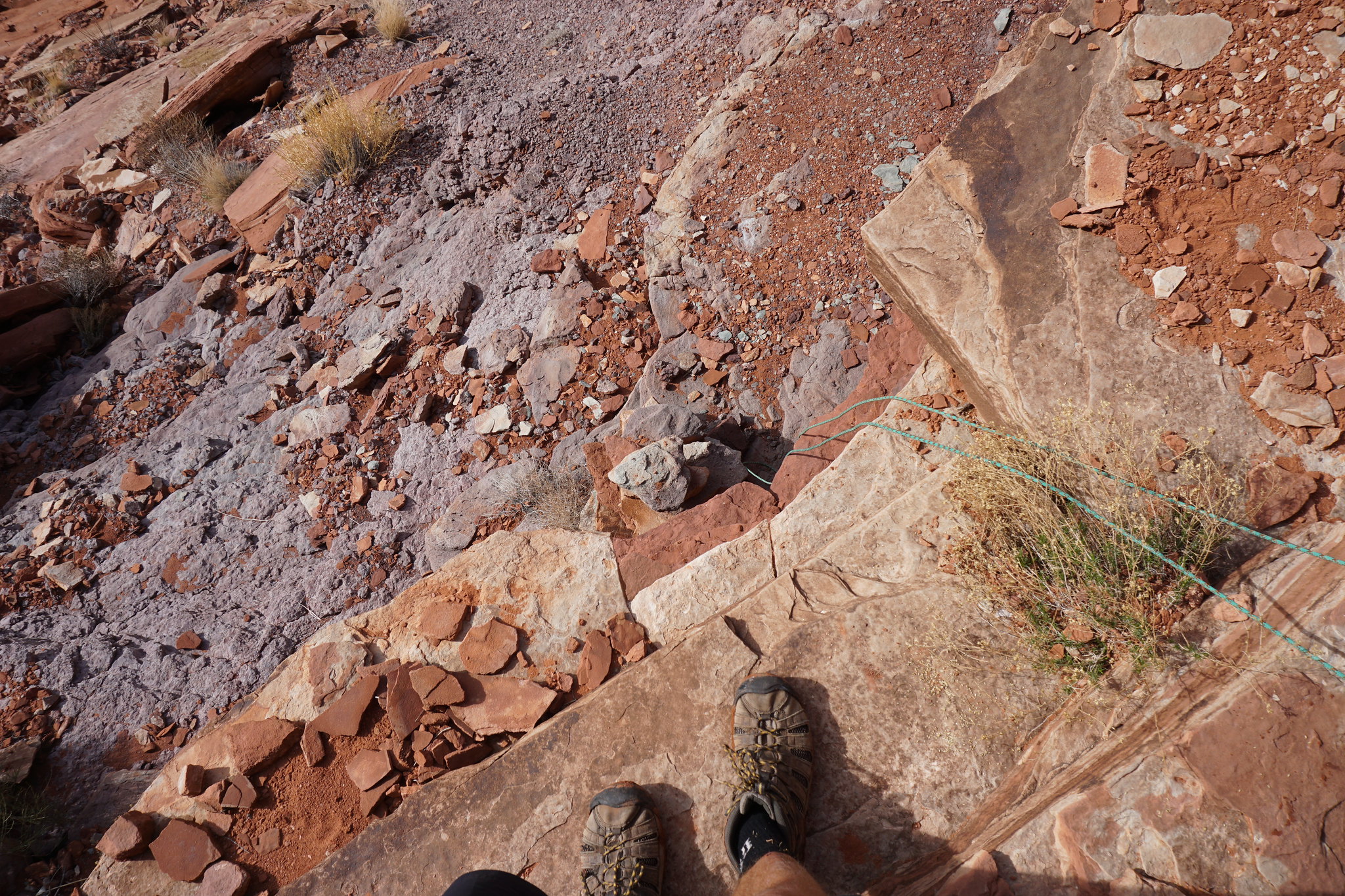 The clothesline rigged and ready to ensure a return, if needed. 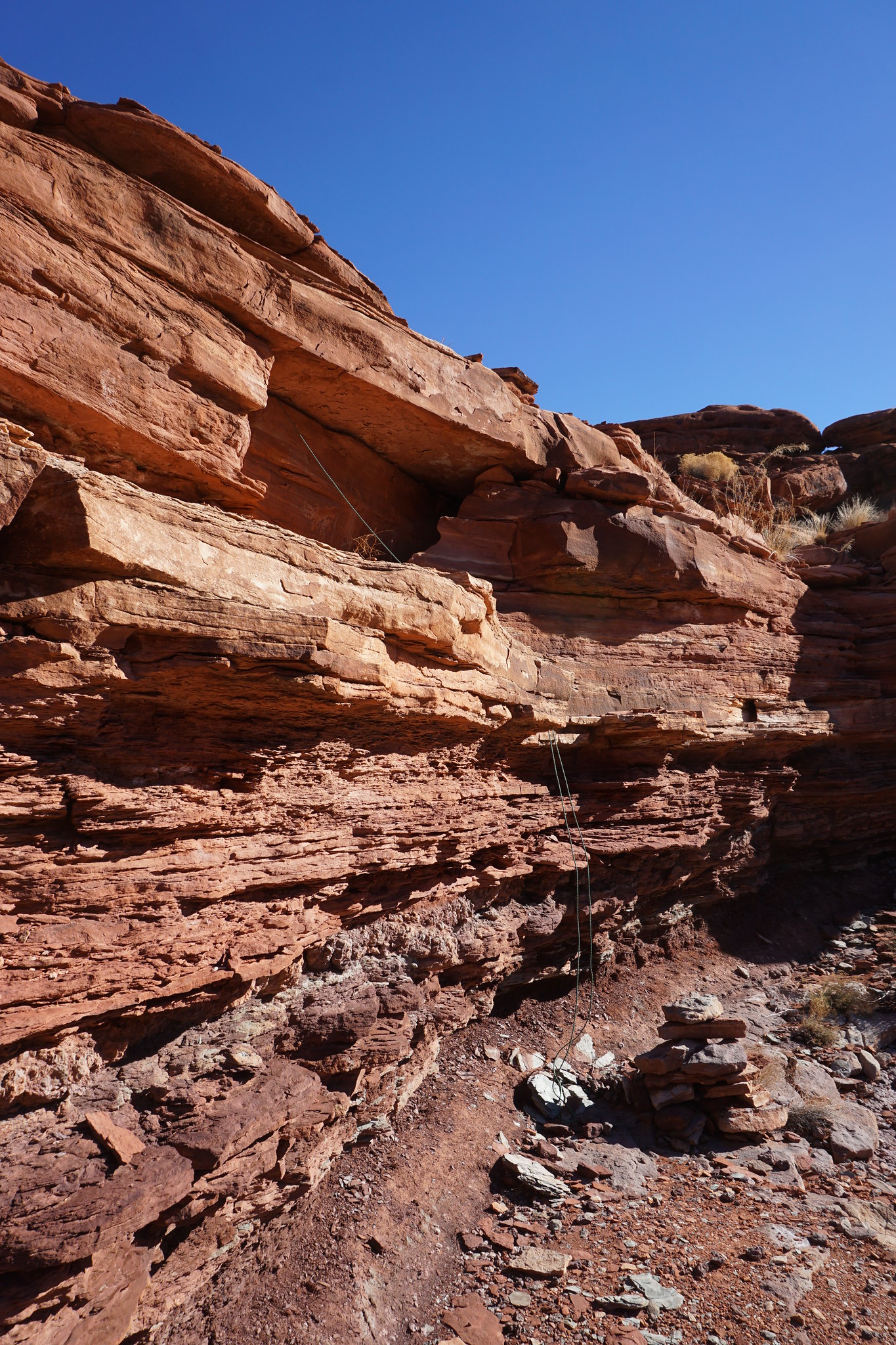 While off course it looks like a walk when photographed, the reality hitting a tired, lonely hiker staring off the edge is another story. 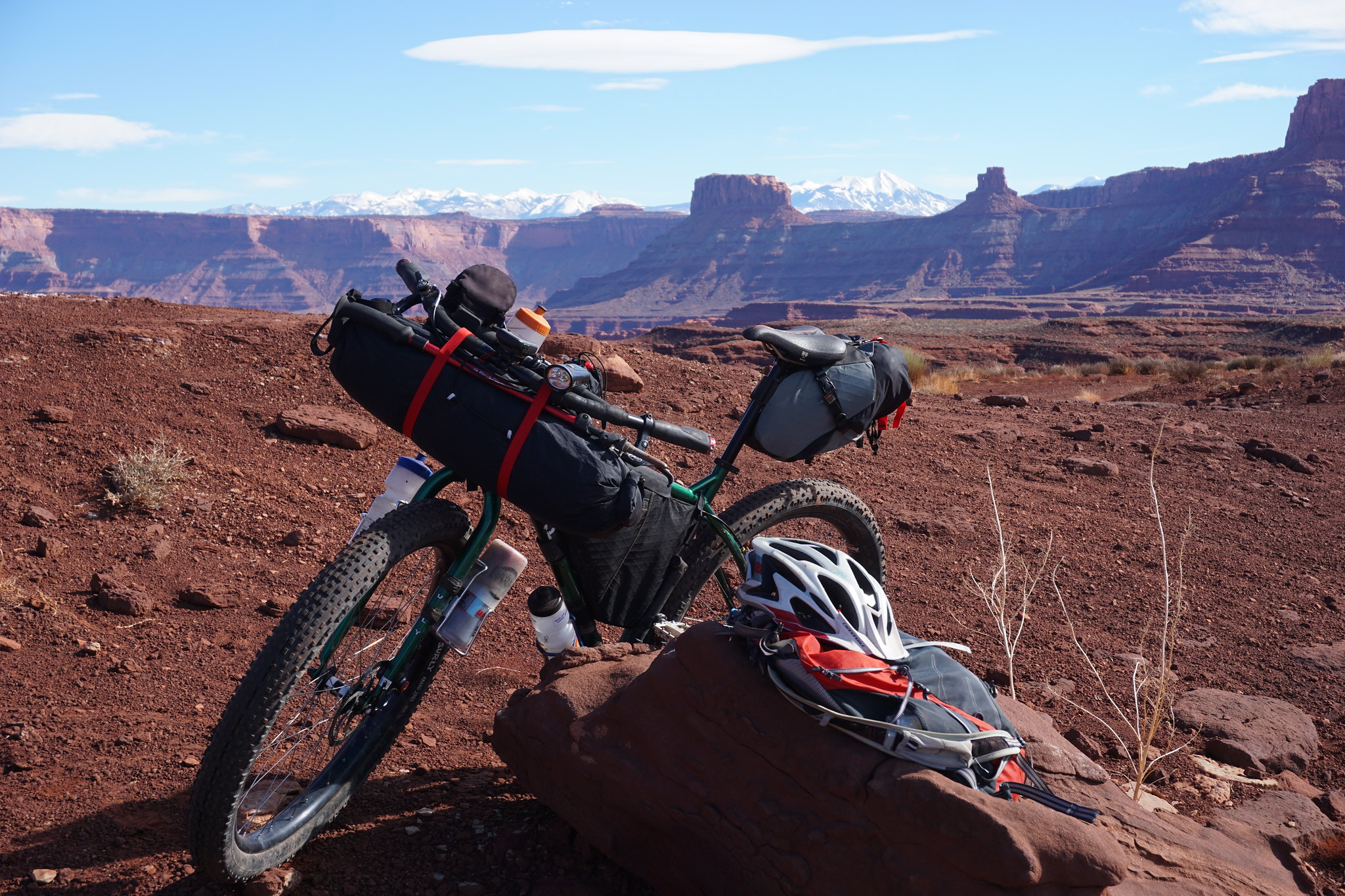 Ready to return to Moab, six hours away.