Off trail traveling in the Wind River Mountains 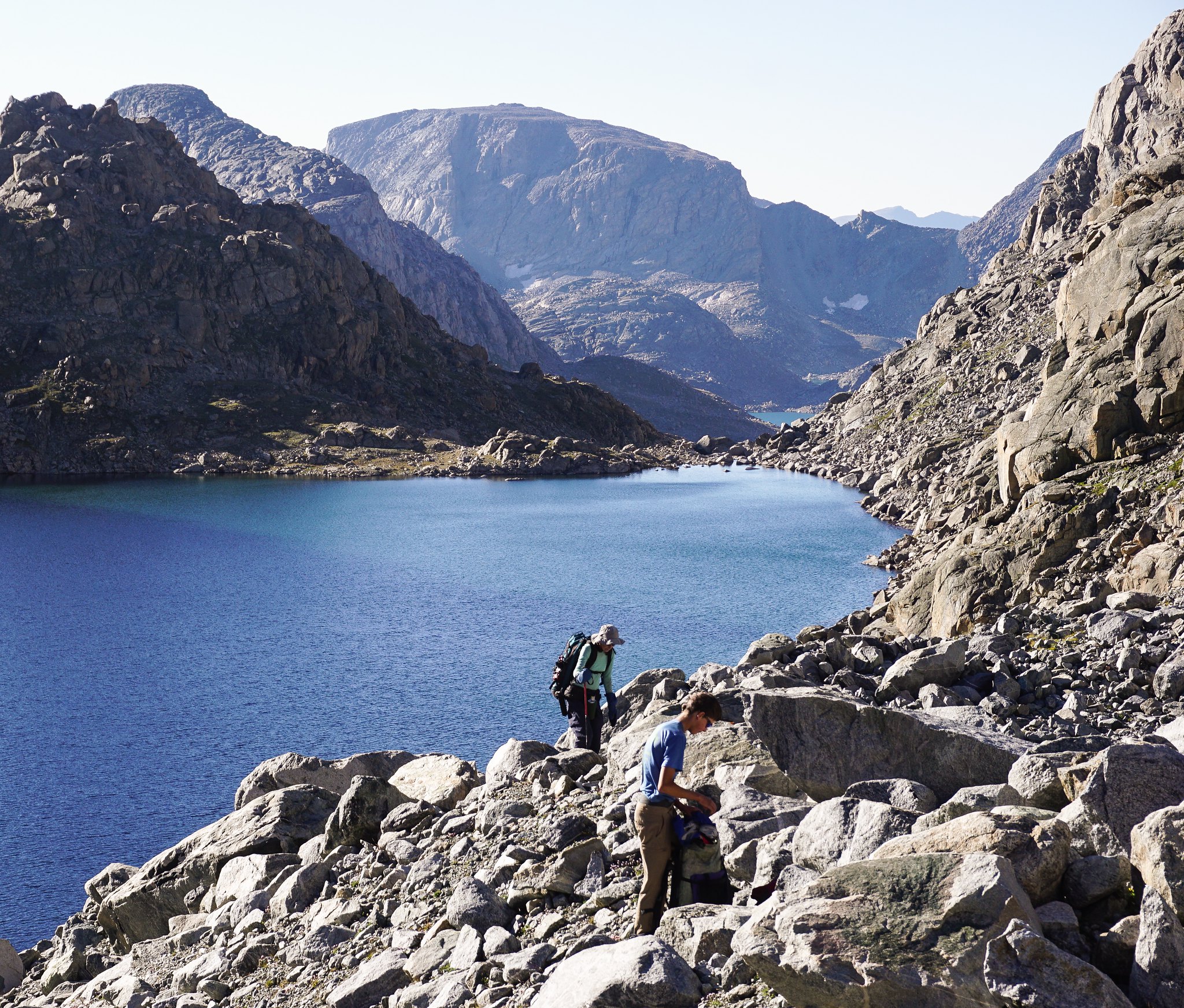 Summer 2015.
I’m sure many of you have seen AdventureAlan’s site ( http://www.adventurealan.com/WRHR/ ) profiling a rugged route from Green River Lakes to Big Sandy. Or maybe some of our members have done the trip? Maybe Alan is a poster here?
Either way, we had hardly any experience with the Winds before going to Wyoming for work this summer. Sonja backpacked somewhere in the range 20 years ago. This July we packrafted the upper Green and bagged a peak not far in. What those trips did do was getting us ready for more.
Flawless granite rivaling the Sierra’s, but somehow more sinister and foreboding than the walls found in the Range of Light. Rugged post glaciated basins seemingly straight from the Cascades. And all that goodness mixed with the typical unstable weather patterns of the northern Rockies. A good recipe for attracting our attention.
Fully immersed in work for the month of July, we only had a few hours on the drive to Pinedale to come up with a trip. An Internet search for something else led us to the site mentioned above, and since Alan gives the option to download some reasonably detailed maps to our phone we decided that it probably would serve us well as an introduction to the inner range.
Furious weather was forecasted for day 2 and 3 so we decided to reverse the route and take the hits on the lower middle section instead of the climax of Knife Point Glacier. This worked out as well as 40 mph winds and driving hail and rain can in the backcountry.
Besides that we stuck to Alan’s itinerary. The descriptions and maps from the site are spot on. It took us six days and we camped in the following locations: Shadow Lake, Middle Fork Lake, ‘Crap Camp’ lake, upper Alpine Lake and below the Stroud glacier. The amount of large talus and the efforts to deal with it should not be dismissed. A few of those remote lake traverses are very time consuming and laborious, bordering on expeditions in themselves.
The ice and snow portions obviously vary with the seasons, but currently should go without spikes. We did carry two axes and a set of crampons between the three of us and felt it allowed more freedom in local route choices. The dog had no issues with any of the challenges thrown at him, even with a pack on, but this young hound is spectacularly agile. I would think twice before flat out recommending this route safe for dogs. Again the car sized talus is the issue.
All together a fantastic route. Undoubtedly there’s more remote areas and bigger glaciers elsewhere, especially north and east of Knapsack col, but as a first dig into these attractive mountains we surely were in awe.
Pics in no particular order. 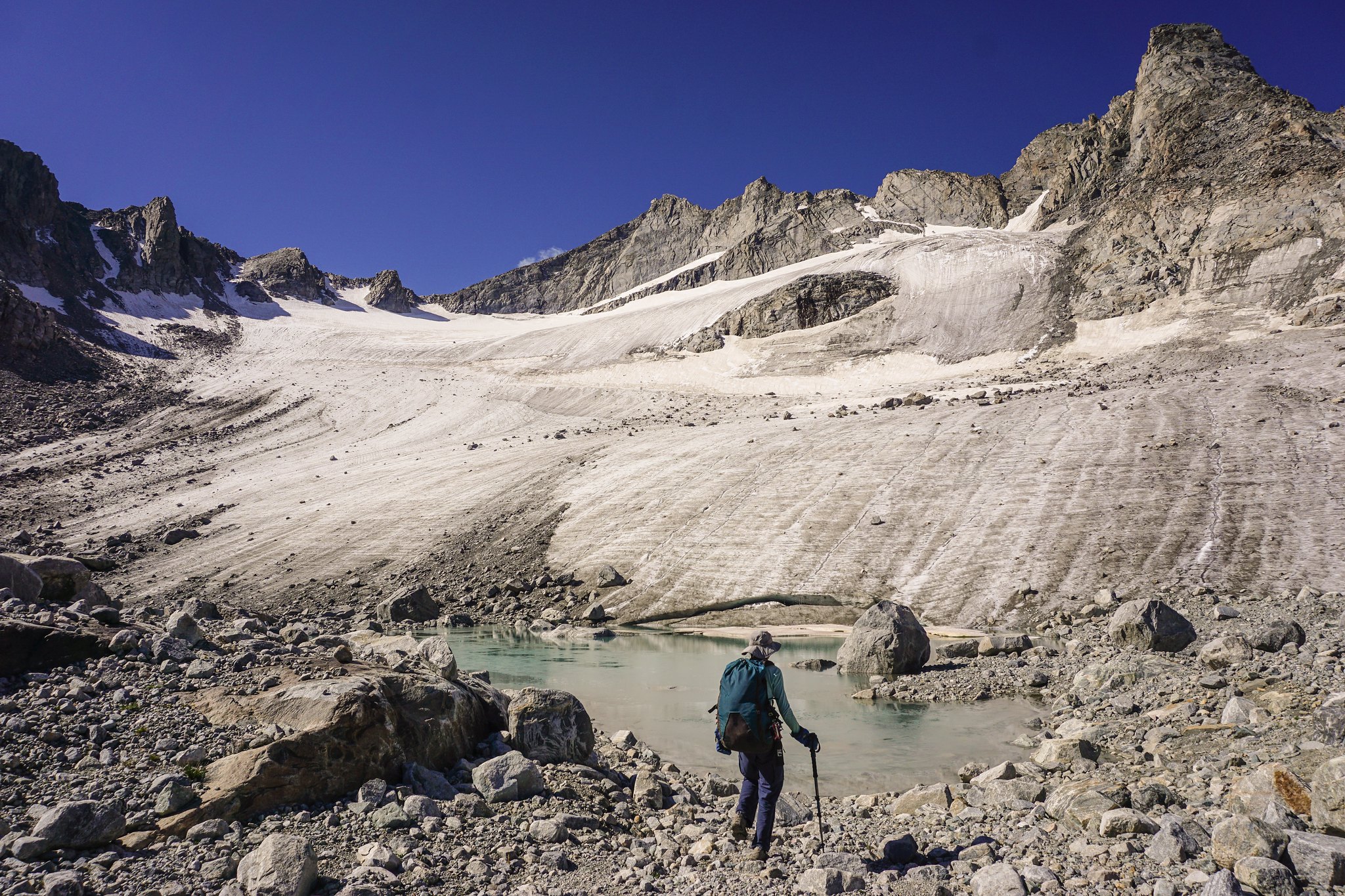 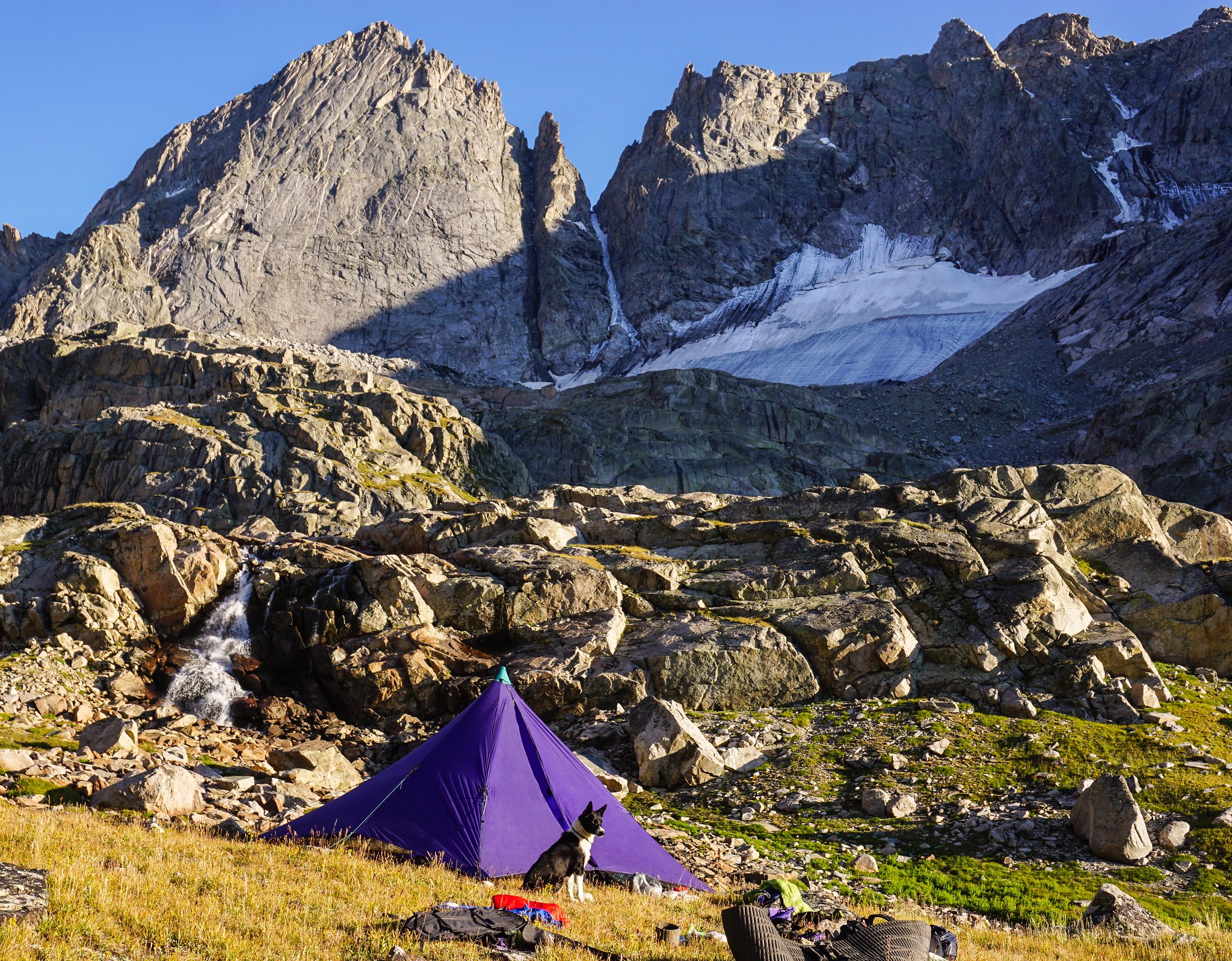 Camp under the Stroud Glacier, official source of the Green River. 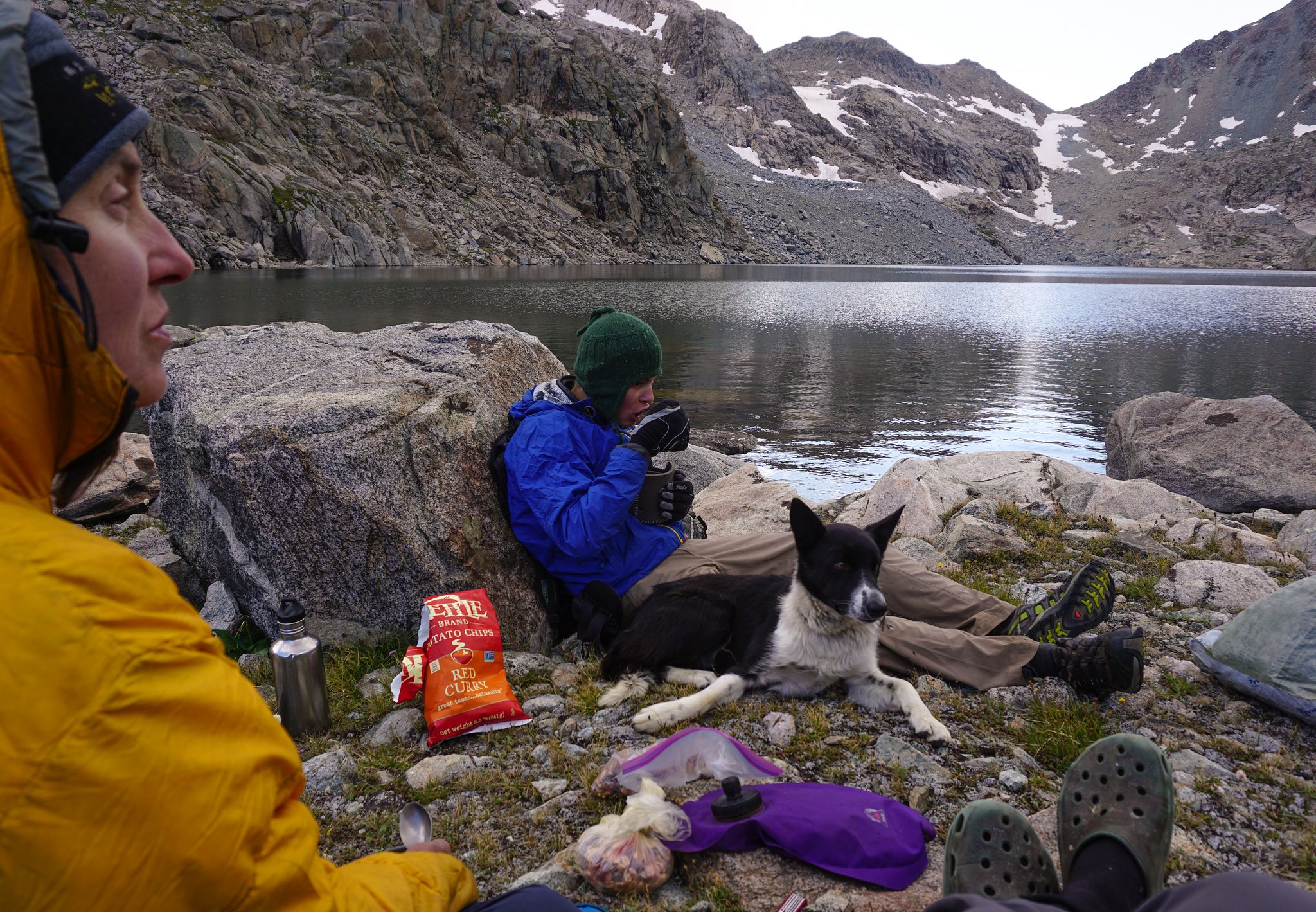 Dinner at the outlet to Upper Alpine Lake. About as remote and hard to get to mountain location as I’ve been to in many years. Alpine Col, the first goal of the the following morning, in the background. 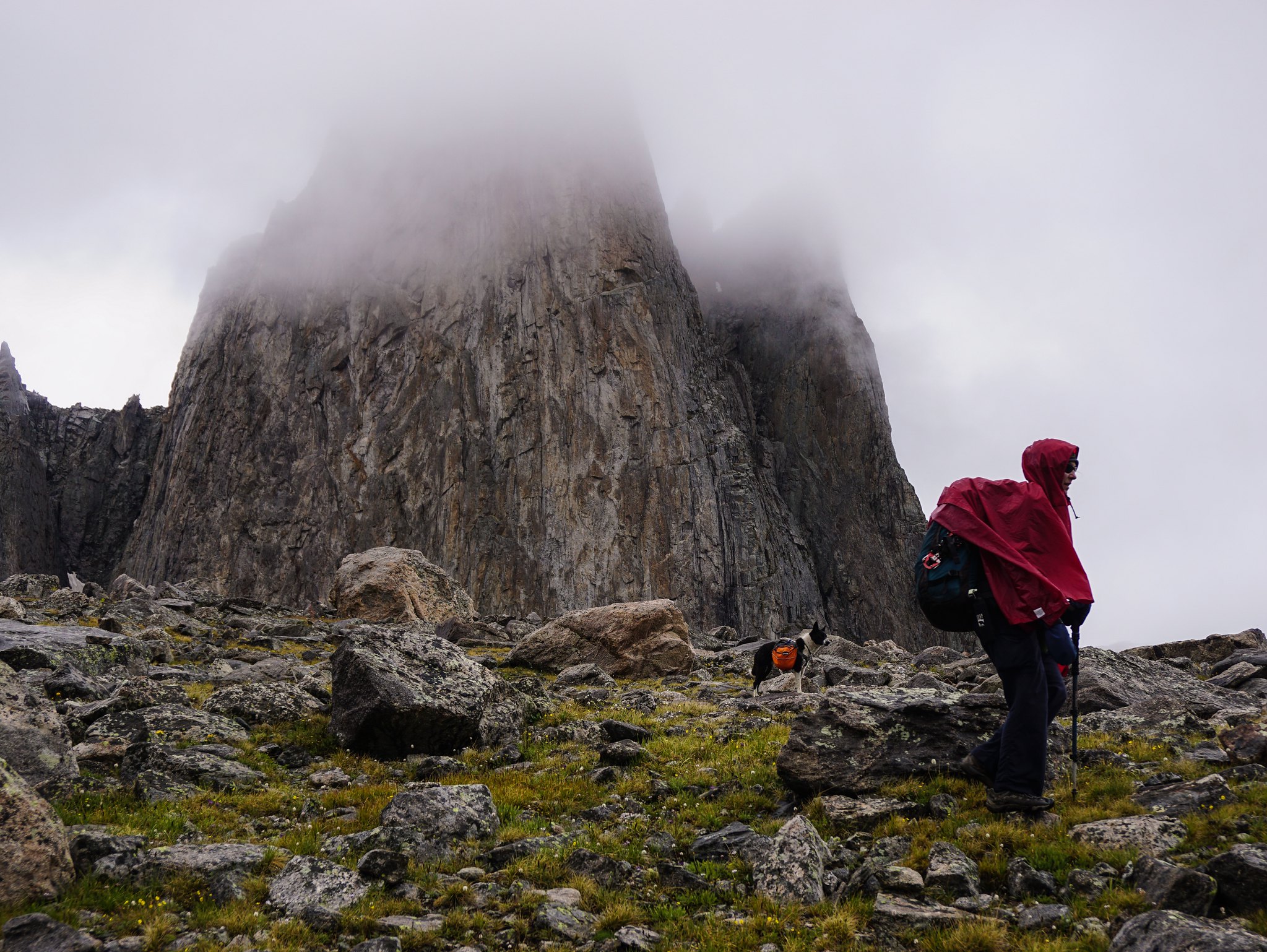 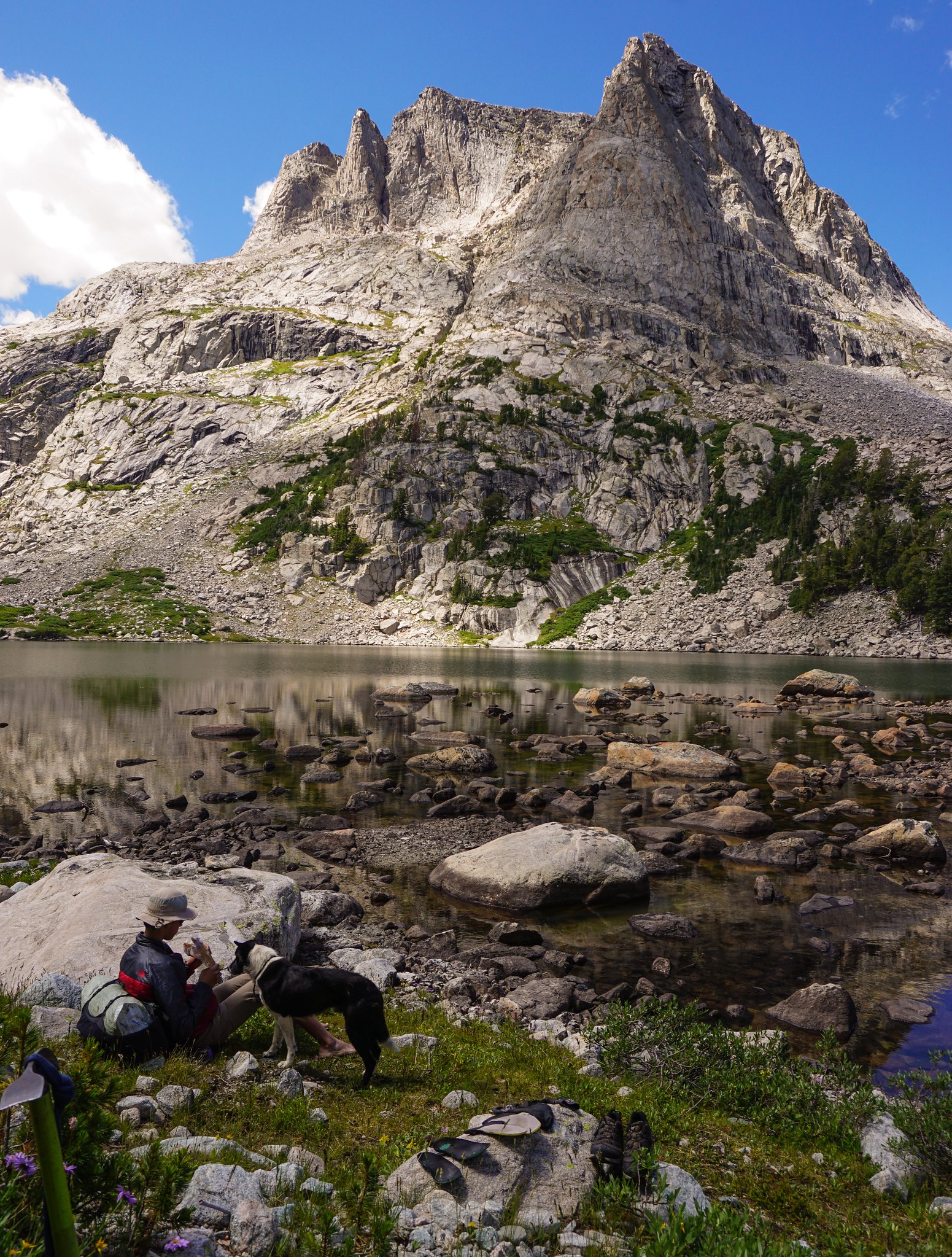 Camp Lake, from where the complex 6 hour climb to Alpine Col started. Douglas Peak above us. 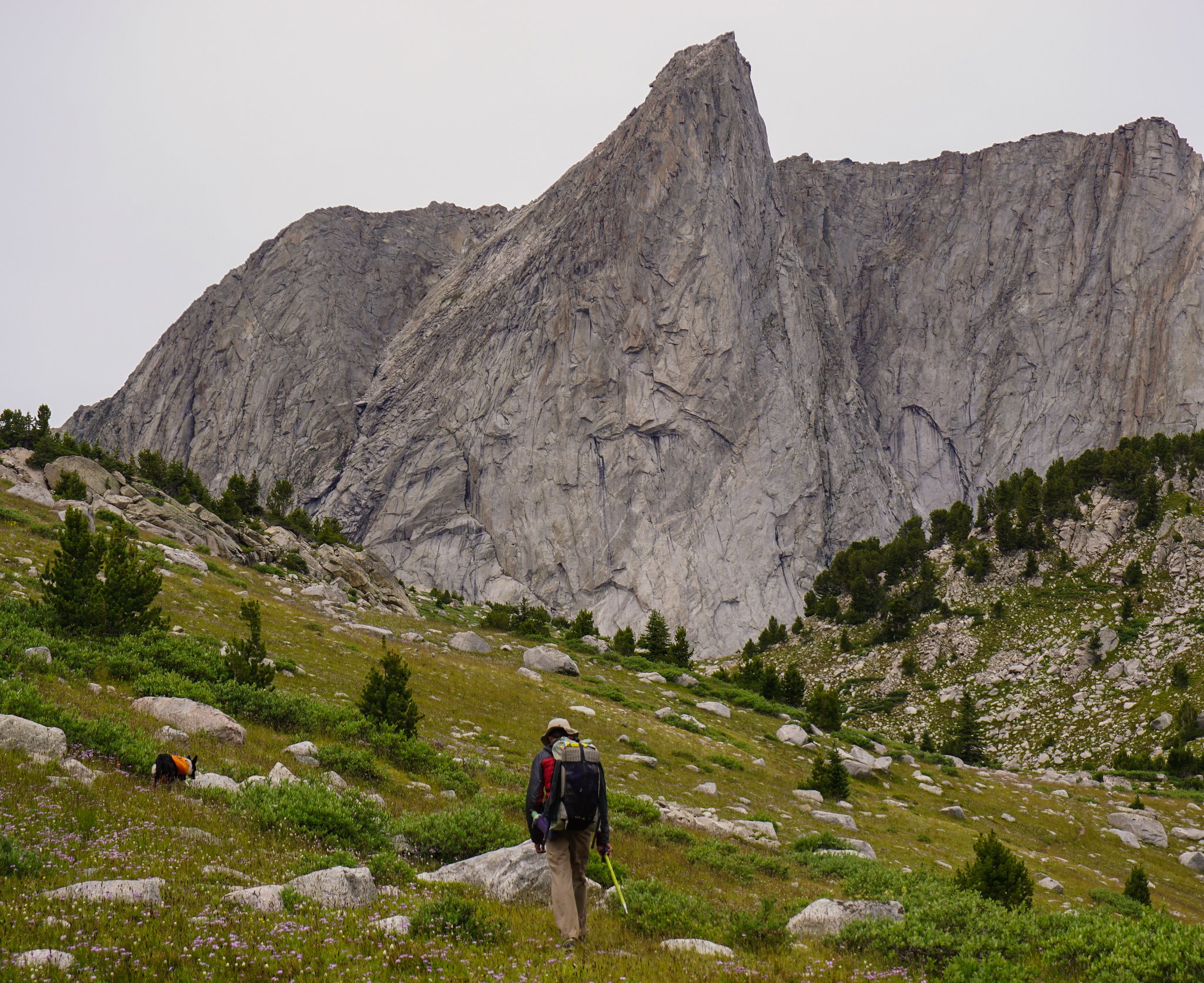 Day 2, on the way to the first pass after Pyramid Lake. Pre-rain gloom. 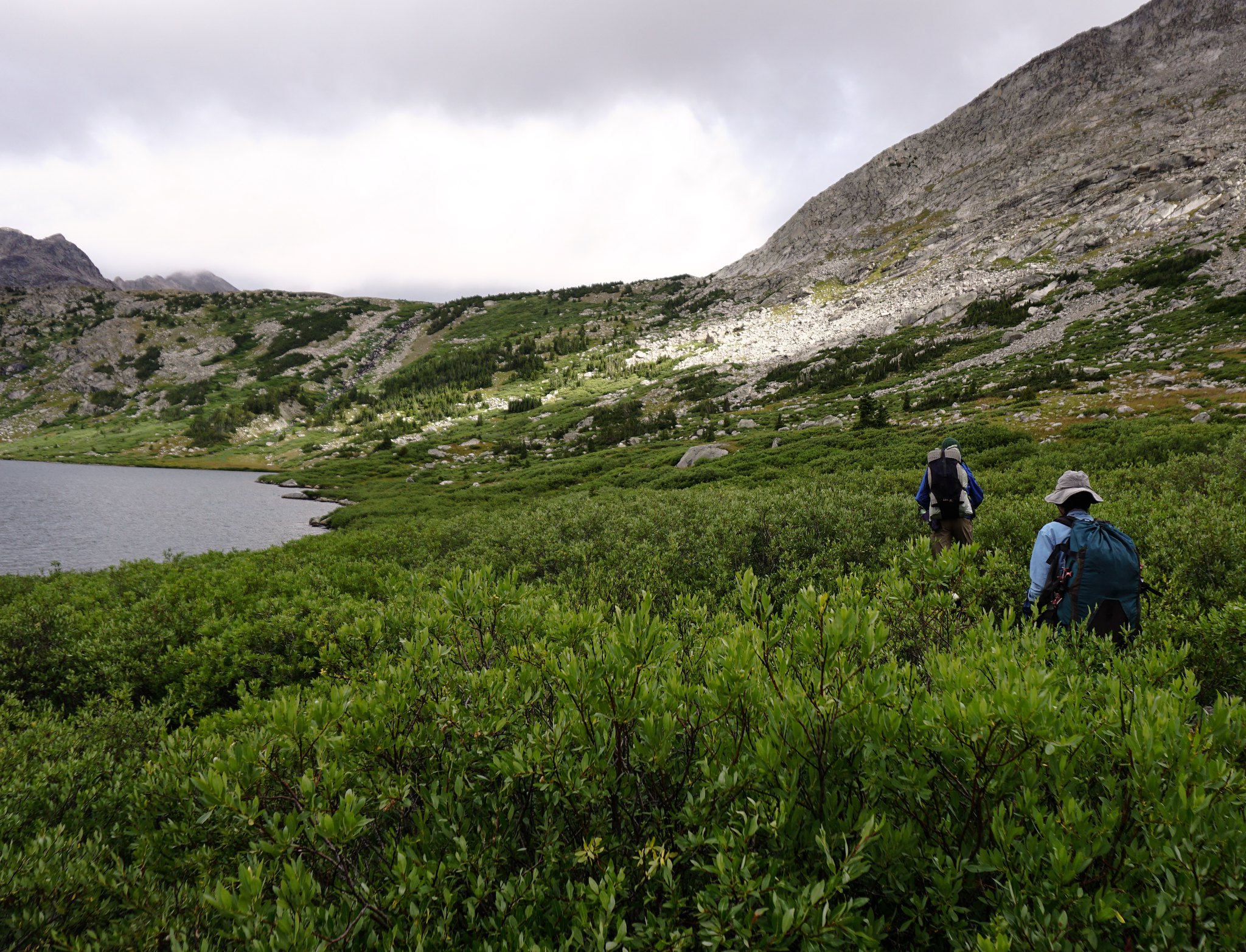 image by jan nikolajsen, on Flickr
Not all of the route was high alpine glory. Here bushwhacking rain-soaked willows for seemingly ever along massive Middle Fork Lake.
Featured image for home page:
[ATTACH]33327[/ATTACH] 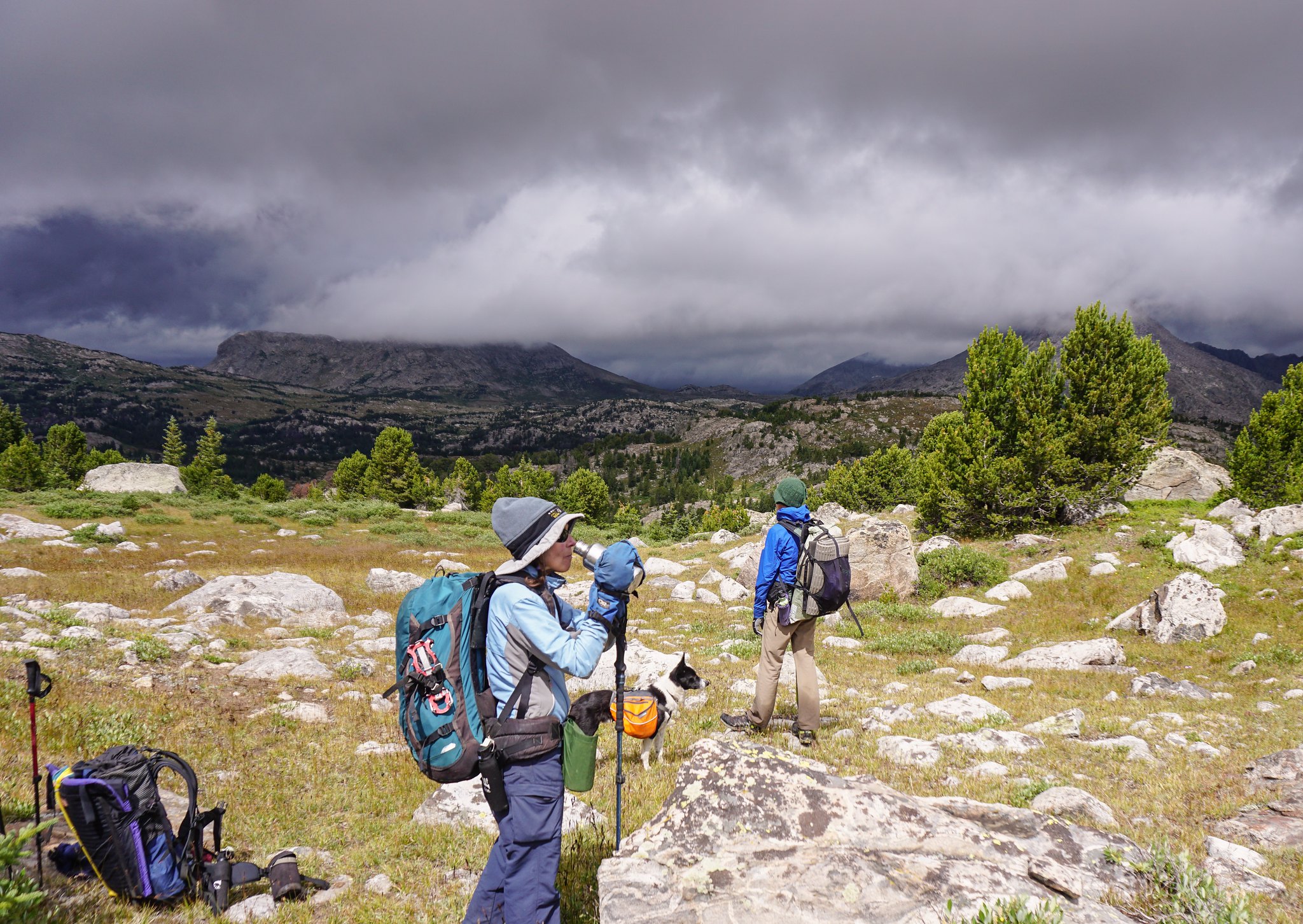 In the middle third of the route relatively low terrain, 10500-11000′, and few prominent features challenged us a bit with route finding. 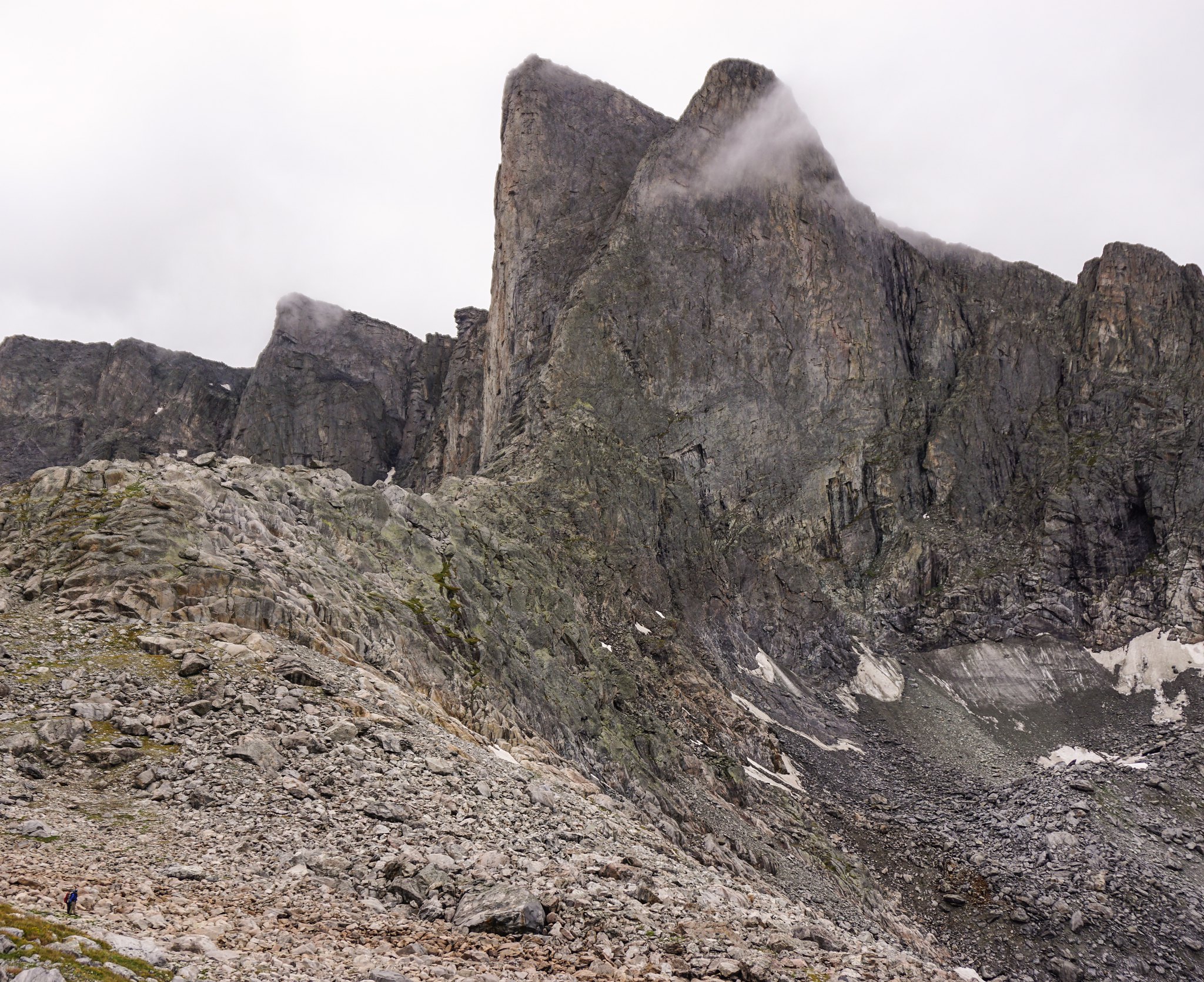 Dwarfed below Pronghorn Peak, after crossing a pass with name we never were aware of. 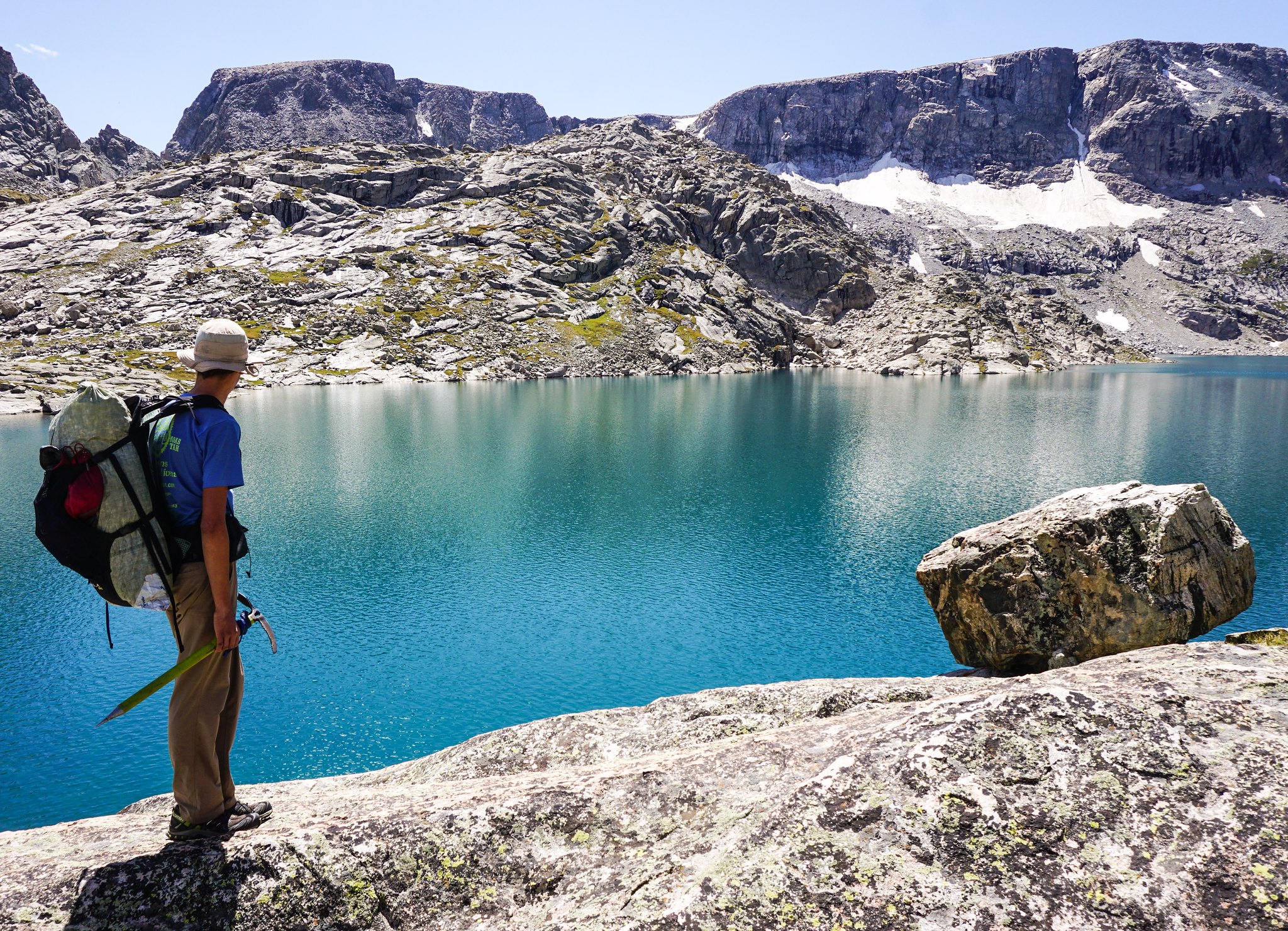 Searching for the 4th class downclimb Alan calls the ‘Exit Crack’. When the correct route was located it turned out to be no big deal. 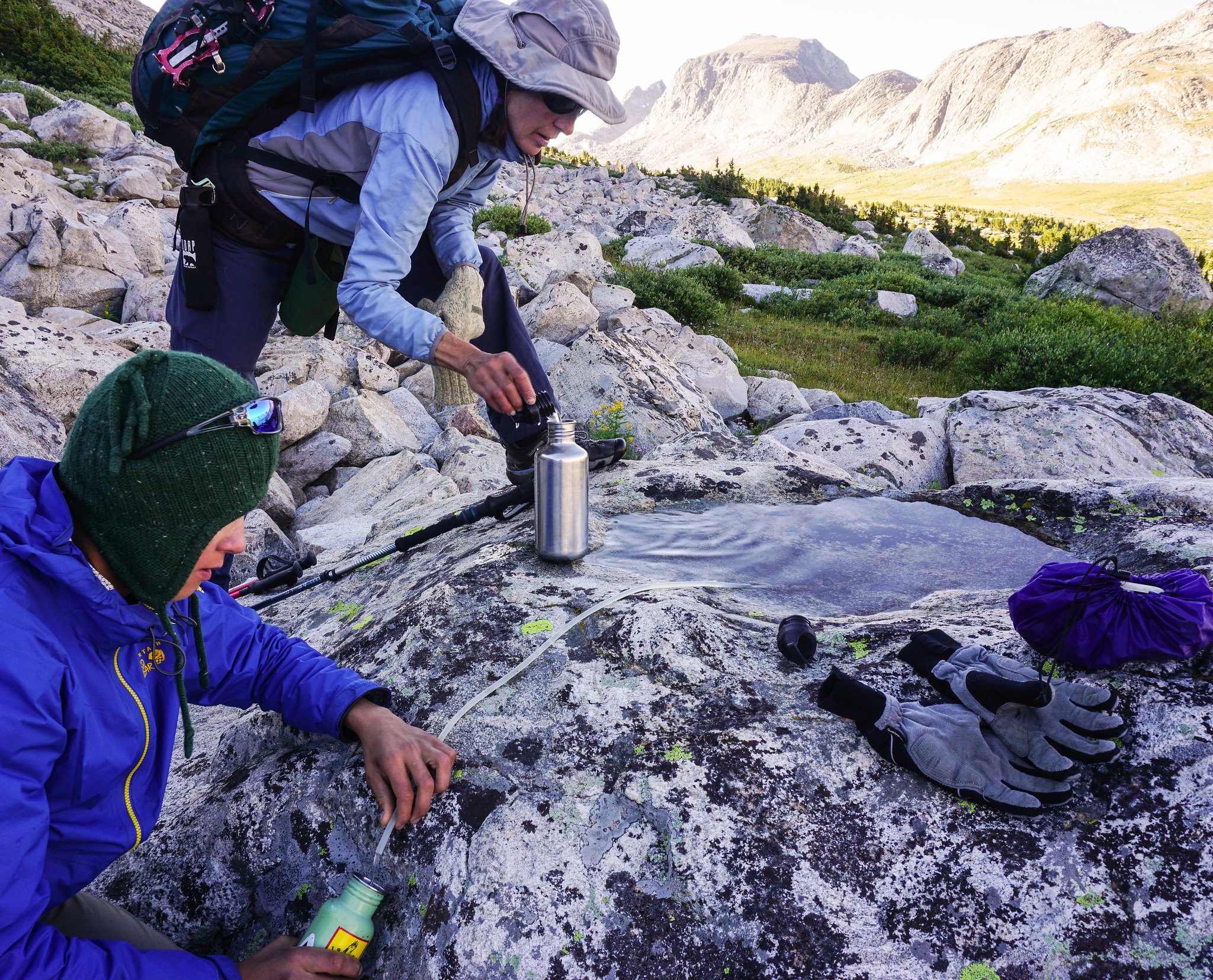 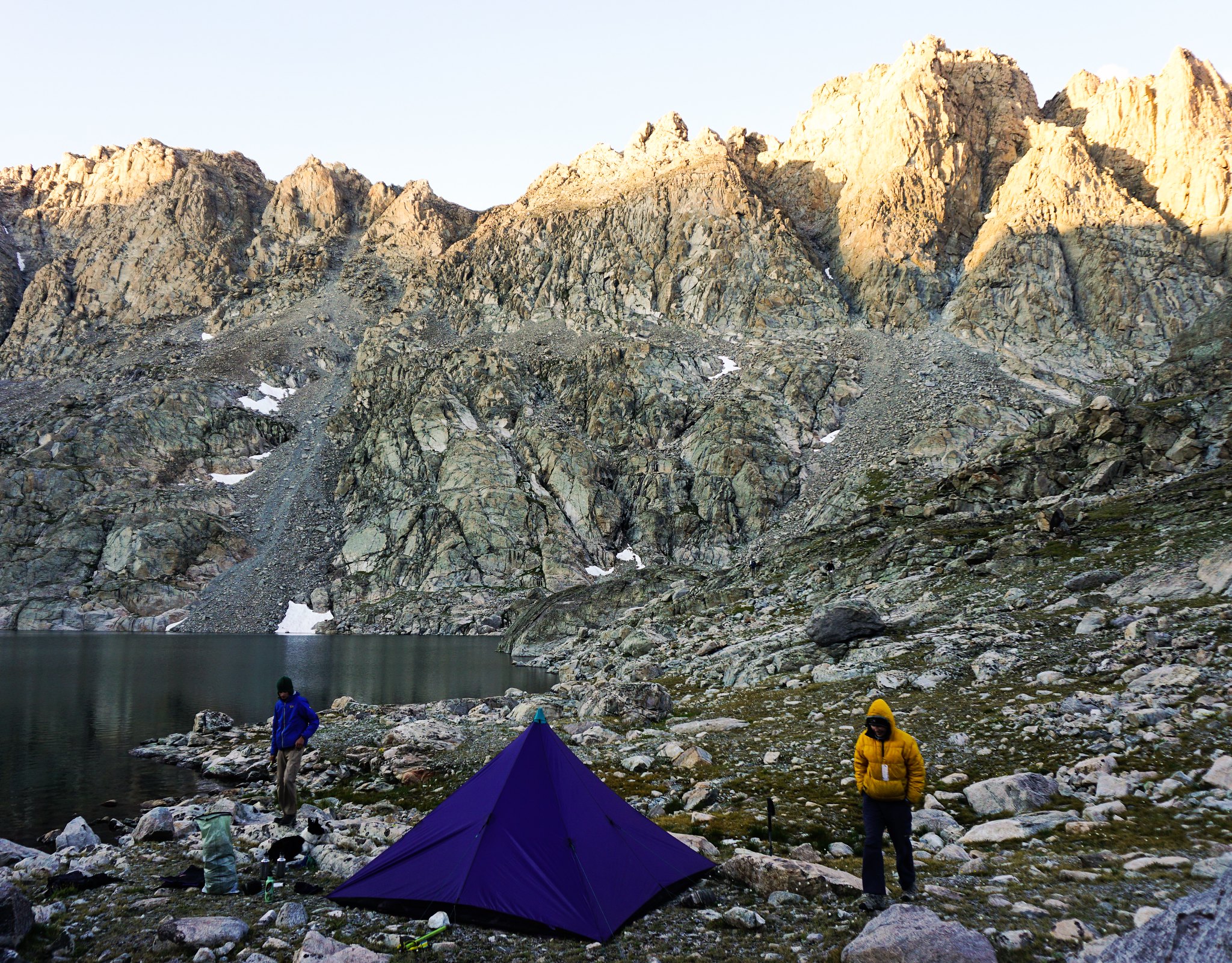 After the sun sets at a cold alpine camp, what else do you do but pace impatiently? 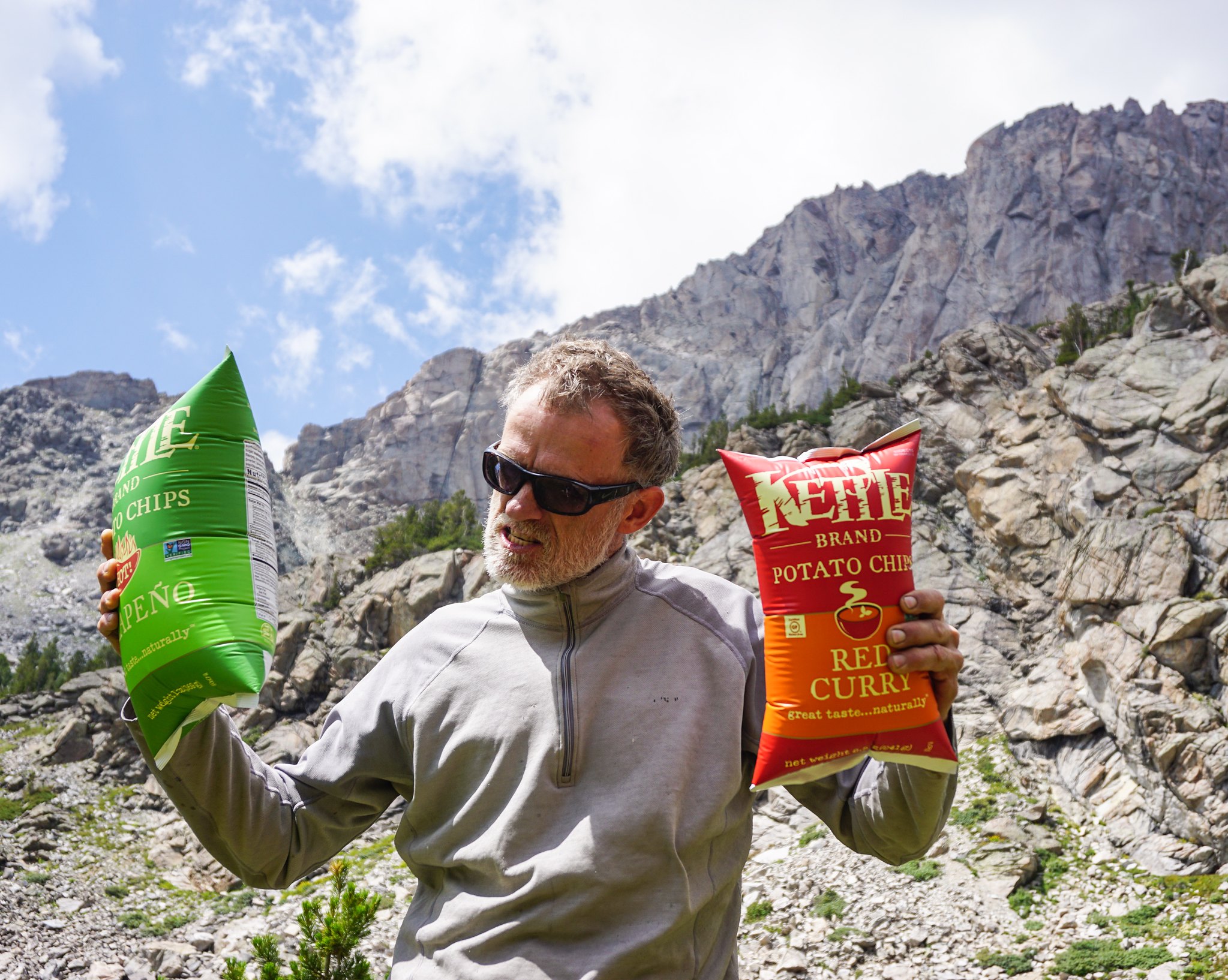 Testing my weak arms against super inflated chips bags. Obviously early in the trip while supplies were still plentiful. 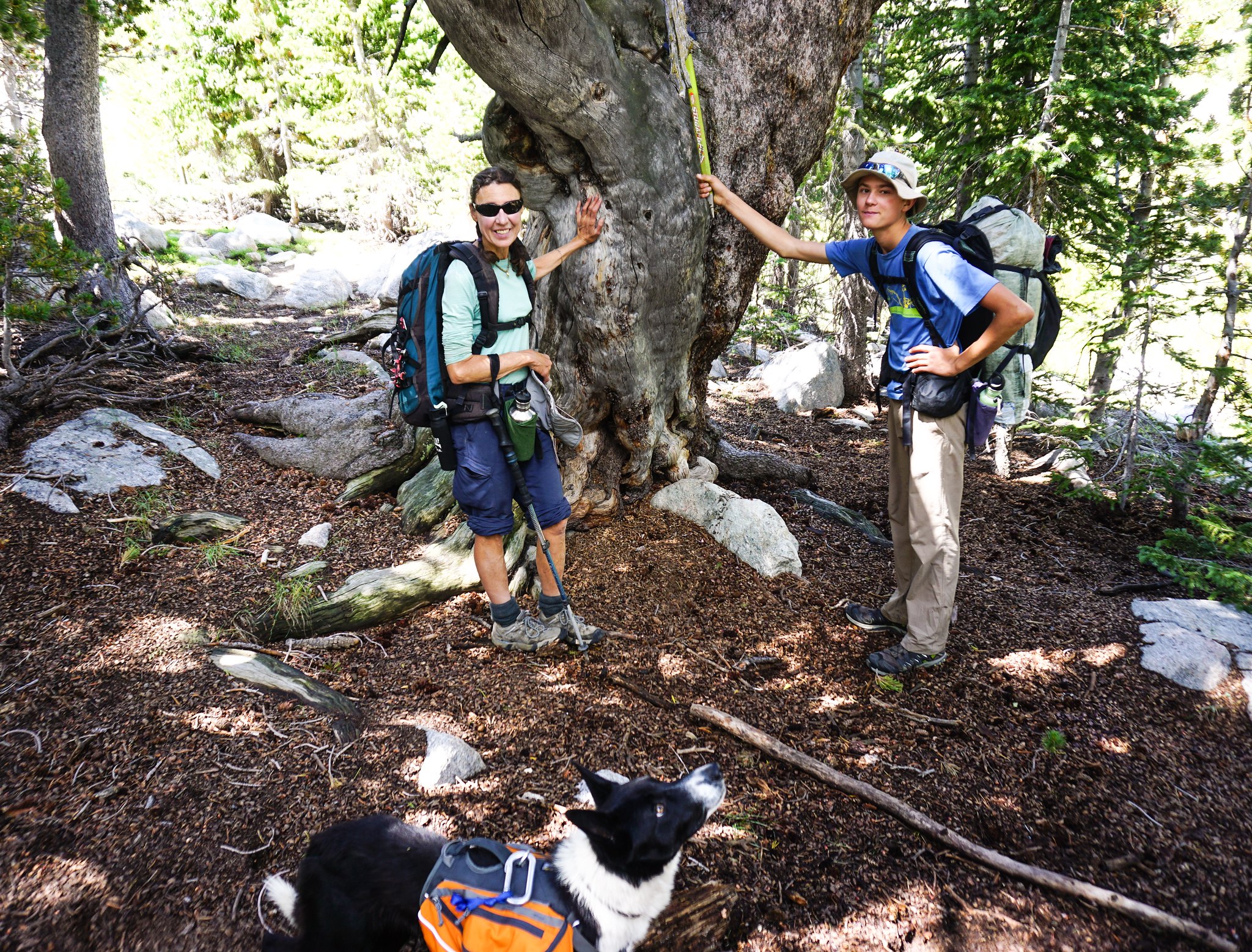 At remote Camp Lake, among trees denser than anything on the West side at that elevation. 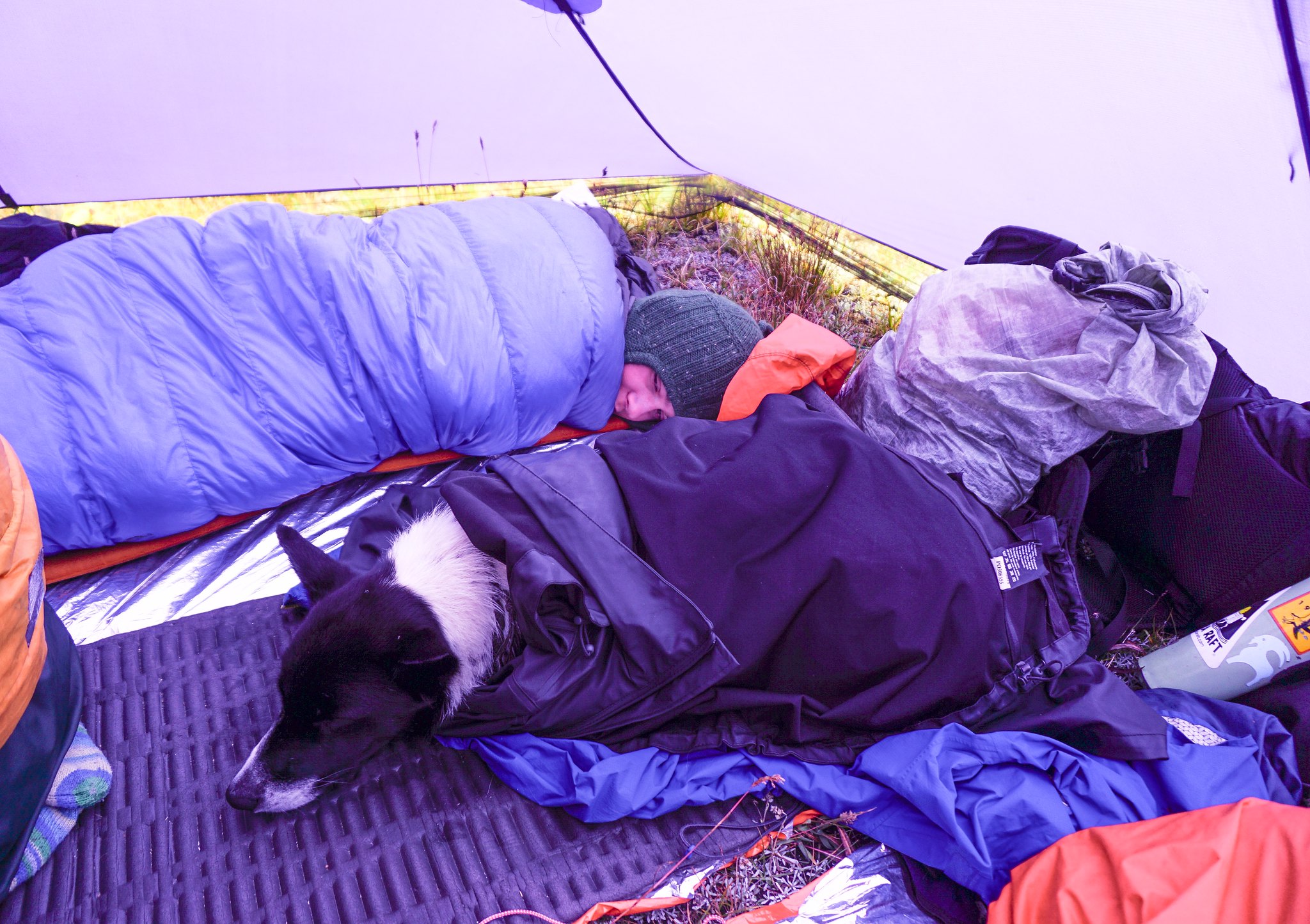 On day 3 the rain and wind was so cold and miserable that lunch developed into a warming nap session. 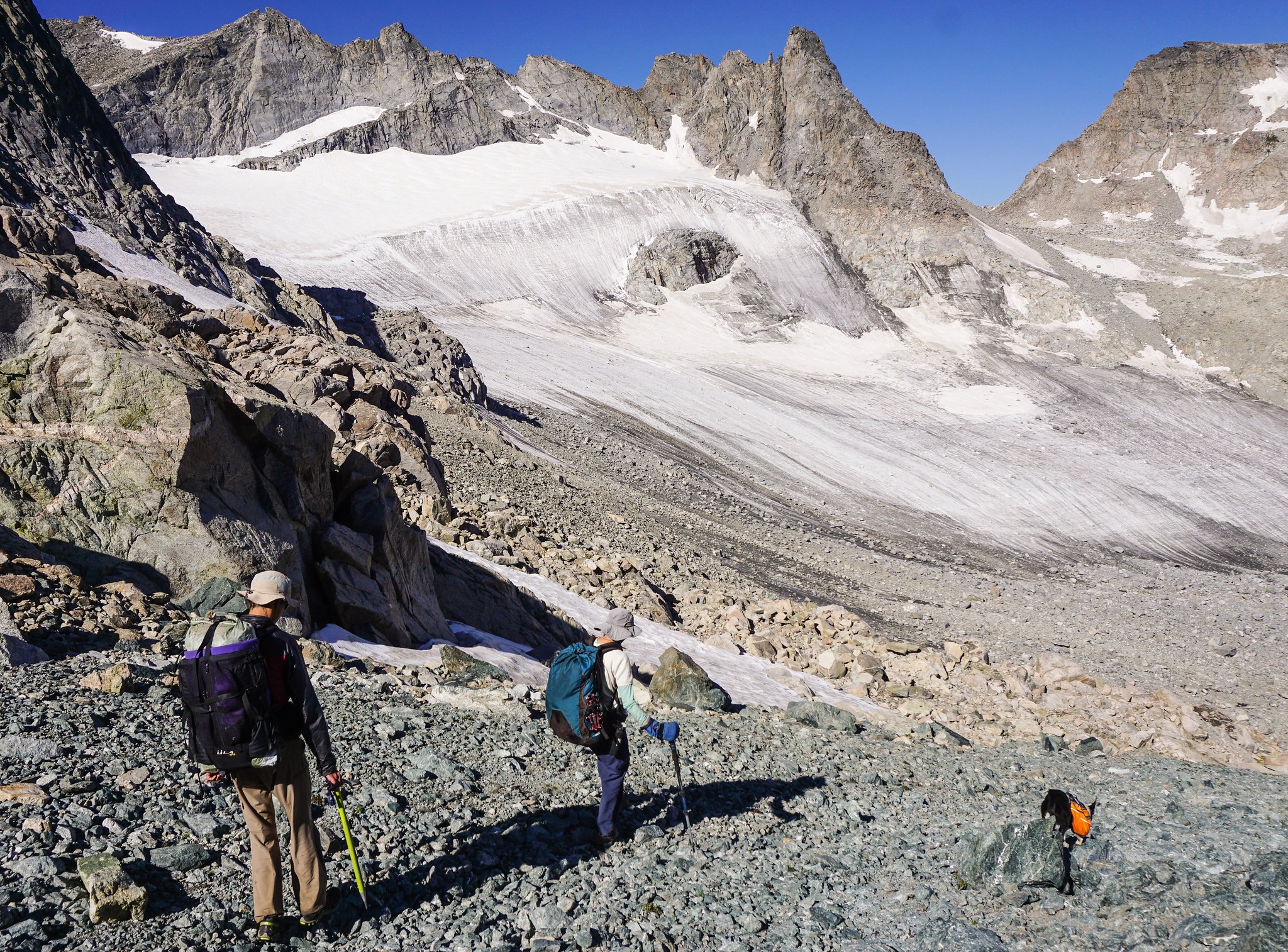 Descending the north side of Alpine Col, with the next crossing, Indian pass, visible between Knife Point and Jackson. 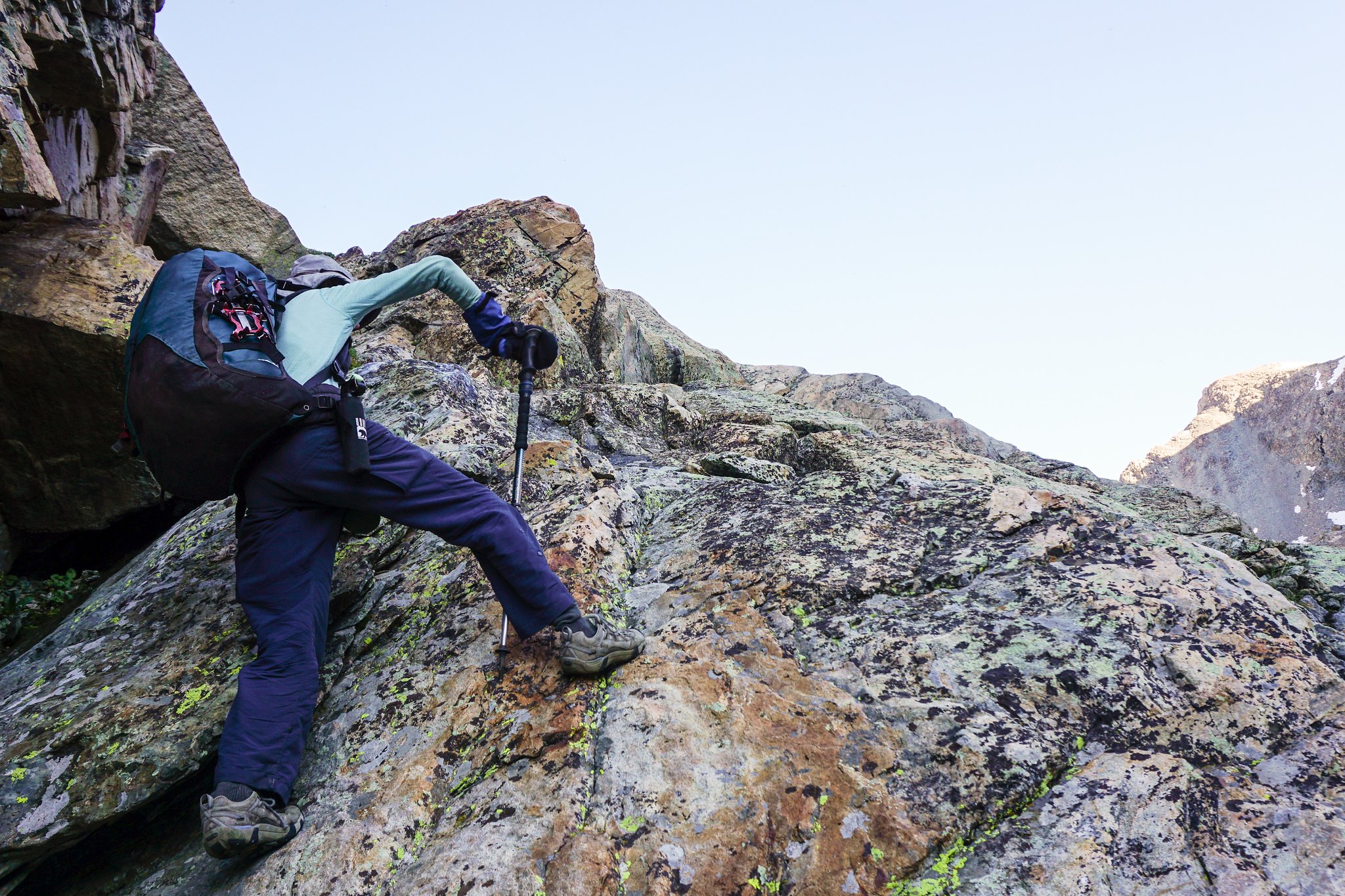 Sonja on one of many little steps leading around the more tricky lake traverses. Many times we thought if the extra weight of packrafts would actually be saving us in the long run. 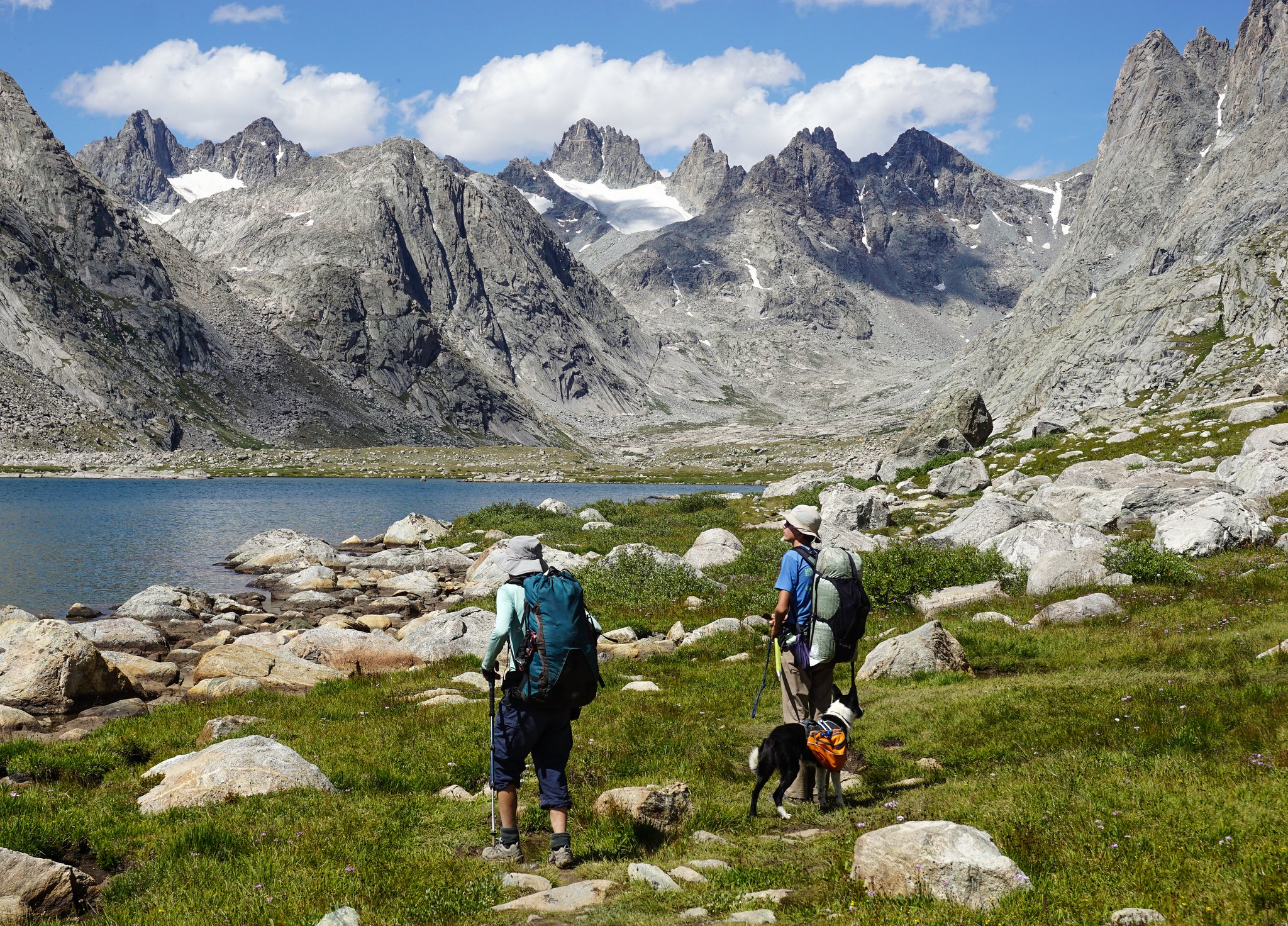 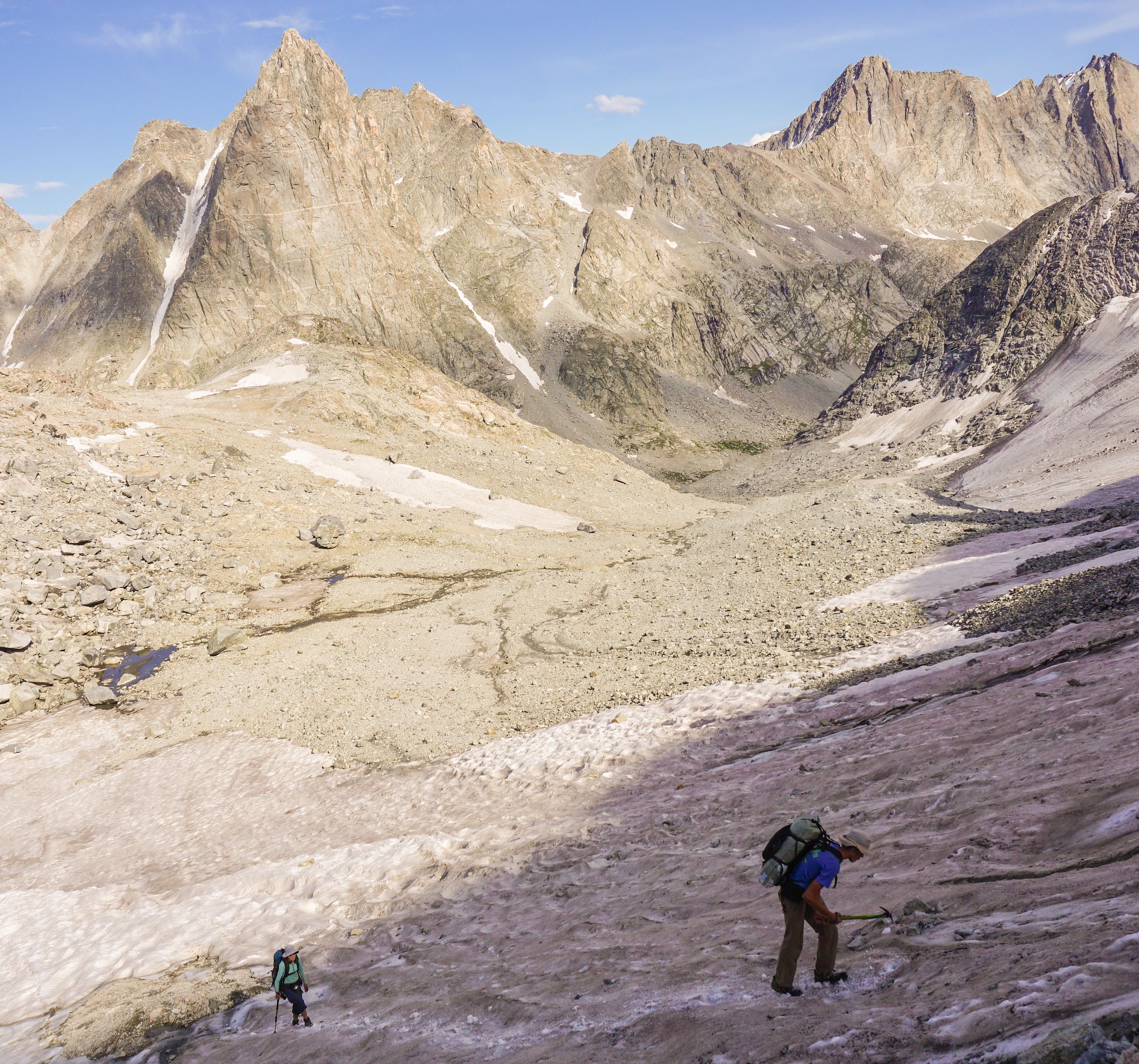 The final climb up to Knapsack Col. The east side is completely without trail but comparatively small talus makes it less of a toil. Which was good, as this was the third 12000’+ pass of day 5. 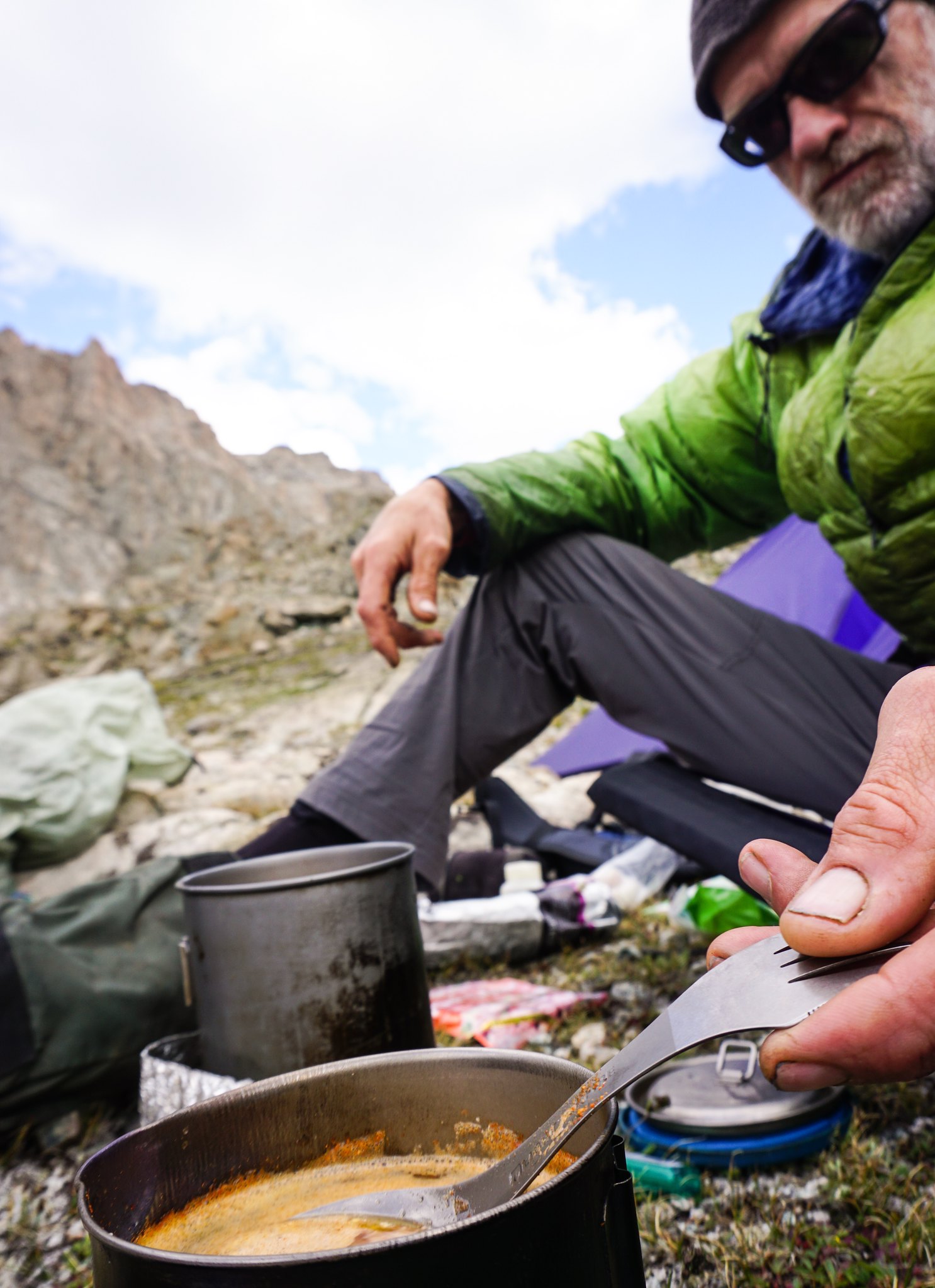 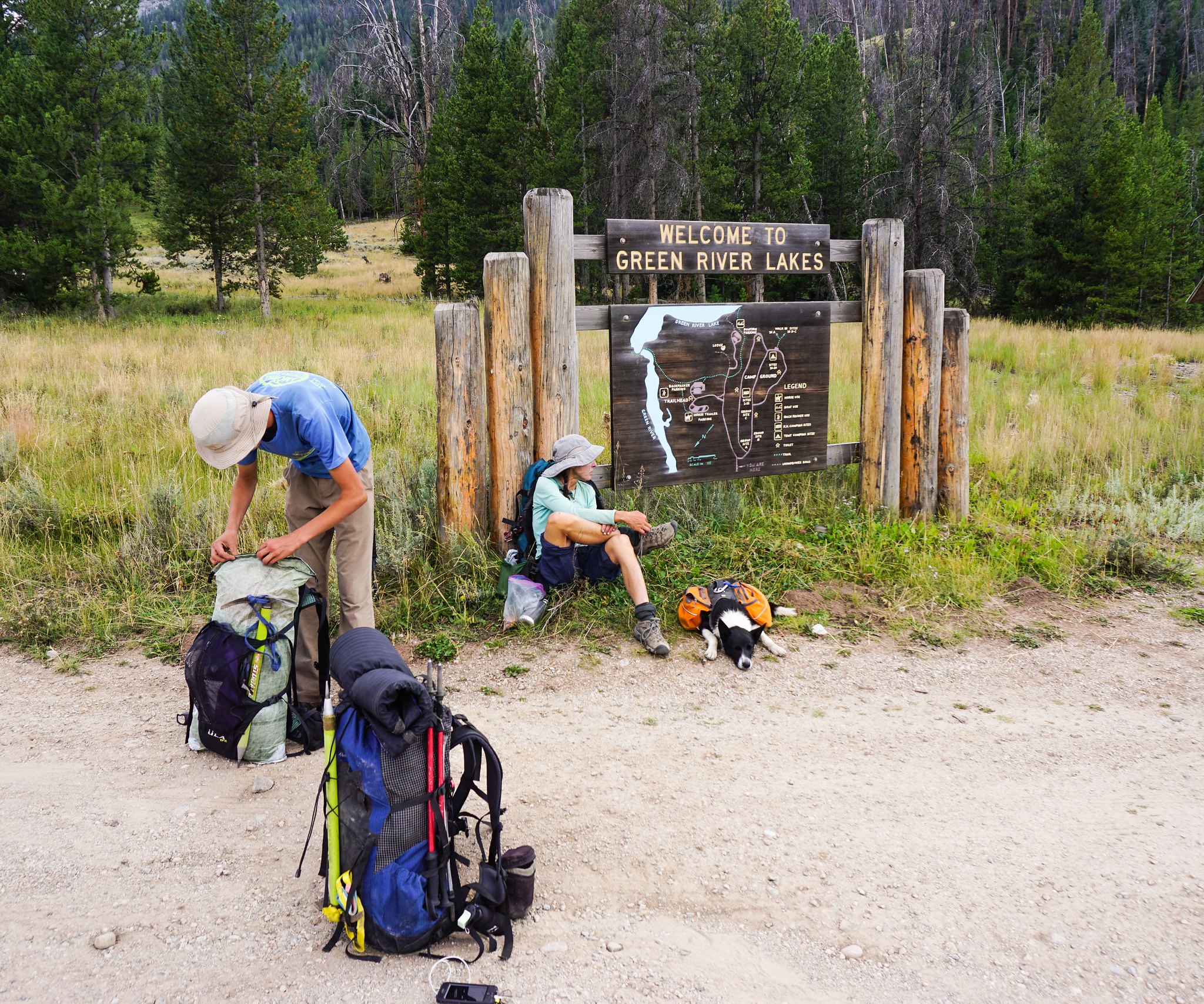 Trying our luck at hitchhiking after the long trudge out along the Green River. It was late and very few cars were leaving. Eventually a family already cramped in a compact SUV happily squeezed us in.